Before I Officially Close The Christmas Season...

...let me post a few more pictures from Paris. 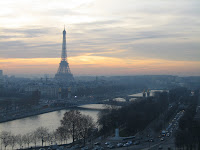 Here's the "mandatory" Eiffel Tower picture I took at sunset while we were on the big ferris wheel that's erected every year (I think) at Christmas time. Us going on the ferris wheel is a classic example of the kind of thing we do when we wander around Paris with no plan whatsoever. 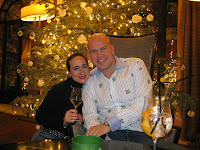 A nice self-portrait taken in the lounge of our hotel while enjoying a cocktail before going out for dinner. Please note the placement of the gin and tonic (with a grapefruit peel...recommended!) that conveniently hides my expanding Christmas love handle. 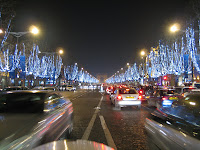 On the way back from dinner, I scoffed at danger by plopping my camera on top of a short traffic signal in the middle of the Champs-Élysées, set the timer, and...voila! 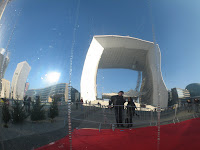 Since it was Christmastime, we thought we should try to hit at least a couple of Christmas markets. We read that there was one at La Défense, so we jumped on the Metro at George V and jumped off a few stops later. Now, I'm not the biggest fan of Christmas markets - I kind of view them as one step above flea markets (which I despise) - but I figured that maybe I'd be able to land something weird like Christmas ornaments made out of French fries, a stocking hat made to look like a baguette, or something else of that ilk, so off we went. And, the verdict?

The La Défense Christmas market has to be the worst Christmas market I've ever seen. Yes, as I said, I don't really like Christmas markets, but I have been to quite a few. So, you can feel confident that I'm speaking from experience. Yes, the food appeared to be very good. Unfortunately, we couldn't eat any because we were so full from breakfast. No, the food wasn't the problem. The problem was that...

...the market appeared to not be selling anything that pertained to Christmas!!!

I think I saw maybe two stands out of 100 selling Christmas ornaments. The other stands just sold the craziest stuff. For example: if you were in the market for a samurai sword, then you were in the right place. Need a hookah pipe? No problem...there were many styles to choose from.

We did manage to buy a couple of wooden games (i.e. Jenga), because giving toys made of wood as gifts seems to be de rigueur these days for reasons I have yet to figure out, but that was about it. Fortunately, the weather was beautiful, so just walking around in the bright sunshine was enjoyable enough in itself. Plus, the fact that the market was so bad meant that we didn't need to hang around for more than 45 minutes before heading off to do bigger and better things like... 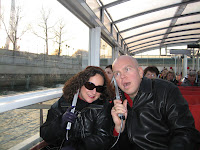 Great picture of the Avenue.

Isn't it rude to talk on the phone when you're taking a river cruise?

michael - We were actually listening to the tour narration.