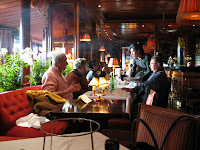 There's a new smoking ban in France. Yes, believe it or not, France is on the road to becoming smoke-free.

I don't smoke cigarettes - although I do puff on the occasional cigar (sorry, dad!) - but I'm kind of sad that the smoke-filled Parisian cafe looks to be a thing of the past.

I'm guessing that a big chunk of French people are going to be overweight in five years. But hey...at least they'll have clean lungs...and our clothes - and Mrs. TBF's hair - won't smell like smoke.

Chicago's ban on smoking in bars & restaurants went into effect on the 1st....I agree it will be nice to go out and not have to take a shower before going to bed!

If you miss it too much, you can still come over at our place ;)

Michael - No foie gras AND no smoking in Chicago restaurants? What da heck is happening in dat city?

cs - Thanks. Maybe I'll have to come over for an occasional second-hand smoke fix.