Gettin' Old Is A Bitch!

Especially if you live in an English-speaking country!

I've been meaning to write about this for some time now. In fact, every time I barbecue something I think to myself: "Gotta blog about this one of these days!" (See? Told ya!) 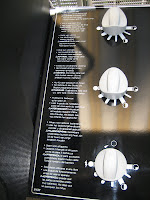 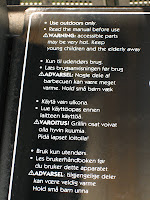 My Weber grill has warnings prominently displayed in ten different languages. But for whatever reason, the good people at Weber feel it's necessary ONLY IN ENGLISH to warn us to "...keep young children and the elderly away." This was pointed out to me a couple of years ago by a Belgian colleague of Mrs. TBF's who speaks English, Dutch, French, and German, with a smattering of Italian and Spanish. I proudly added my two cents worth by confirming that the Finnish translation - Pidä lapset loitolla! - also did not mention the elderly. However, I was also quick to point out that Finnish was the only language where the good people at Weber deemed it necessary to include an exclamation point!

What's up with THAT?

I'm guessing it was probably brought up during a brainstorming session at Weber HQ that the Finns - being a stubborn people - would just ignore the warning, so the folks at Weber added the exclamation point to show the Finns that they meant business. Or, at least that's my theory.

And all this talk about the elderly reminds me of another thing I've been thinking about...

When is a person "officially" elderly? My dad is in his early-70s, and he told me the magic number is 80. He also told me that when he turns 80, he's going to tell me it's 90. It's not really that important for me to know when we're here, but we're leaving for America this Saturday, I plan on doing some grilling while I'm there, and I want to know before I go so I can...

I'm dying to know what makes the English-speaking elderly particularly unsuitable to hang out near grills.

Could it just be that they're worried about the elderly forgetting that they're barbecuing and leaving the steaks on the grill too long?

Are the grills sold in the US? Maybe it is something extra to avoid spurious litigation...