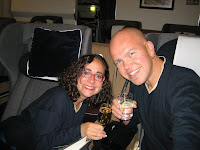 I can't believe it's been a year since we got on the plane, turned left (thanks to Mrs. TBF's BA gold upgrade coupons), and raised our glasses in celebration of our 20th anniversary trip to Japan.

Last night, I mentioned to Mrs. TBF that it had been just over a month since we were in Amalfi. And...it felt like FOREVER ago.

I mean, it feels like just yesterday that I was running around with a full head of hair and six-pack abs without a care in the world.

I still talk about our trip to Japan as if it were yesterday... and it was 2 years ago! I think I need to go back.