Gone But Not Forgotten...

I did something different this year, and I think it's going to work out well. 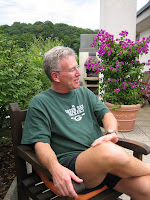 We have some really big potted plants in our rooftop garden that have to come in for the winter. Namely: the bougainvillea (just ignore the Green Bay Packers fan in the foreground), the bottlebrush plant, and a rather large hibiscus. Over the past couple of years, I've brought these plants into the apartment where they've proceeded to drop a bunch of their leaves for the sole purpose that King can bat them around all night causing me great annoyance.

The plants survive the winter OK in the apartment, but they pretty much look like they're barely clinging on to life when I return them to the rooftop in the spring. Yeah, they bounce back. But, for example, the bougainvillea doesn't begin blooming until about July 1st. The bottlebrush plant, which normally blooms at the end of May, began blooming in September this year.

I'm a greedy gardener - I want to maximize bloom-time.

This year, thanks to our friend Dr. (pharmacology) Rammy, our plants will bask the whole winter in summer-like warmth in a greenhouse. She arranged for her gardening service to come pick up our plants this week, and they were whisked away at 8:00 a.m. this past Wednesday morning.

As my babies sped away down the road in the Alabor trailer, I felt a twinge of sadness...and happiness.

For how many more summers will I enjoy their blooms?

Update later: I just noticed that on the first glance of this post that it appears as if I am eulogizing Dr. (entomology) John. Let it be known: DR. JOHN IS NOT DEAD!!! Although, he is a Green Bay Packers fan. And that, in my opinion, officially qualifies him as disabled.
Posted by The Big Finn at 10/17/2008 04:30:00 AM

Just think of it as "Boarding School" for plants!

A bottlebrush! That's super (which I say because they're Australian and I'm Australian too)!

michael - I kind of it being like the plants are going to Florida for the winter - just like my parents.

rswb - I knew that they are indigenous to Australia, but I think of them as being Corsican. When we were in Corsica a couple of years ago, we saw them all over the place.

Corsica? Pah! I saw a lot of them in Monaco, actually, when I was there last year. And also a few eucalyptus trees (also Australian) planted next to the beach. Which was odd, and confusing.