Biff and Muffy Go To The Opera...

We went to see Falstaff at the Vienna Opera House on Friday night. We felt very posh hobnobbing with Vienna's High Society. I even wore a jacket and tie for the second night in a row - I think that's a new European record for TBF!
In hindsight, we're glad we went to the opera. Sure, it's expensive. But, it's one of those things that should be checked out at least once in a lifetime. I think Mrs. TBF liked it better than I did - it must be the Italian connection. I didn't hate it, but I thought it could have been about two hours shorter than the three hour marathon it turned out to be. That's a long time to be watching something that's being sung in Italian. I couldn't really follow the plotline, but hey...what the heck! All in all, I have to say that the costumes, stage design, and opera house itself were pretty darn impressive. And, I'm pretty impressed with the fact that I managed to stick it out for three hours considering my usual thirty second attention span. 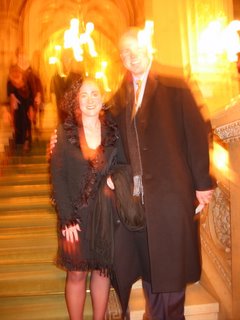 A lady asked us if we'd like her to take our picture and I said yes. Unfortunately, I forgot to change the setting on the camera which is too bad because it would have been a nice picture of us.
After the opera, we walked across the street and had a nice dinner at a place called Korso bei der Oper. Since we didn't sit down to dinner until after 10:30 p.m., we were happy that it ended up not turning into the four-hour marathon from the night before. We enjoyed our meal, and we were equally entertained by the six Russians seated at the table right next to ours. It seemed that their goal was to see how many truffles they could consume in one dinner. I'm guessing that the waiter ended up with carpal tunnel syndrome from shaving truffles onto appetizers, main courses, etc.
What's with all the Russian tourists? I've noticed that a lot of things I've read in Vienna are written in German, English, Russian, and Japanese. Da!
Posted by The Big Finn at 12/25/2005 07:47:00 AM