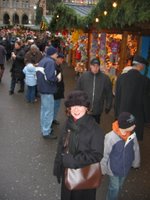 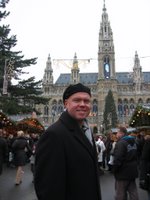 Vienna has Christmas markets scattered around town. On Friday, we took the subway (called the U-bahn) out to a market at Schönbrunn. It was, to tell you the truth, a little disappointing. There weren't as many stands as I had hoped, and it was just altogether unspectacular. Plus, having walked through Basel's Christmas Market many times, I began to realize that the one in Vienna sold pretty much the same junk I don't really want to buy in Basel either. So, we just walked around the market twice, drank this hot "rocket fuel" drink called Pünsch (a little like Glühwein, but stronger) bought a couple of little trinkets, and then rode the U-bahn back toward our hotel. A big bonus of the excursion ended up being that we came out of the subway, walked in the opposite direction of our hotel, and ended up in an outdoor food market called Nascht.
Nascht has to be the nicest open-air market we've ever seen. It was great walking through it seeing people loading up for their Christmas dinners - fantastic beef roasts, turkey, goose, fish, olives, etc., etc., etc. stretching for hundreds of meters. Why can't they have a place like this in Basel???
Zip ahead to Saturday...Knowing that we'd be gorging on food again in less than ten hours, we thought that it would be wise to get some exercise. We grabbed a quick lunch by the cathedral, picked up a few odds and ends at a couple of stores, and then made our way toward the Christmas market by the city hall (rathaus). Ok...OK!!!! So we stopped at Demel and had a couple of pieces of cake and some Viennese coffee....BIG DEAL!!! We eventually made it to the market, and I'll say that this one ended up being quite enjoyable. A lot of the stuff they were selling there was absolute junk, but there was some good stuff too. Mrs. TBF even found some pumpkinseed oil soap (she is, afterall, a pumpkin junkie!).
Along with all the stuff being sold at the booths, there was also a wide assortment of food for sale - with the word "food" being used very loosely in this instance. Sure, it's something you chew and swallow, but whether or not it contains any nourishment whatsoever is another matter. On a scale of 1 to 10, with 10 being the healthiest food, Christmas market food would have to come in at about a -3. Case in point... 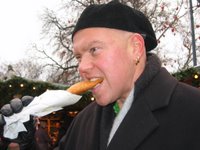 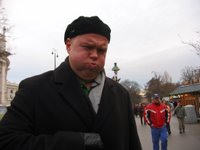 At one point, while walking around the market, I suddenly had an out-of-body experience and found myself floating above what appeared to be a lifeform looking something like TBF ordering a "Toast-Langos" at a food stand. I had no control over what this lifeform was doing, so I just observed him giving a lady 3 Euros and then waiting while she threw what appeared to be a long piece of batter dipped cheese wrapped in salami into a vat of oil. After about a minute in the oil, the lady took the monster and brushed it with melted garlic butter. YUMMMMMMY! I watched the TBF-like lifeform gobble up the Langos in less than a minute. A little while later, the Langos was talkin' back!
God knows I'd never eat something like that. Weight Watchers allows me 26 points per day, and I'd have to say that this fine piece of culinaria has to clock in somewhere in the neighborhood of 50 points!
Posted by The Big Finn at 12/25/2005 10:52:00 AM

You're bringing back lots of great memories for me! I spend a study abroad semester in Vienna while in college and I loved the Naschmarkt! (probably because it was the only place we could afford food as college students...)

Glad to hear you had such a good trip. Looking forward to seeing you both in the New Year.

I'm so pleased to hear you say the words Christmas Markets and Junk. If it wasn't for the ambience of the whole thing then they'd be a complete waste of time. But, it is rather nice, being in a snowy twilight listening to the carols as long as you don't expect to buy anything useful or unusual.