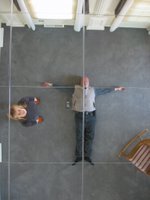 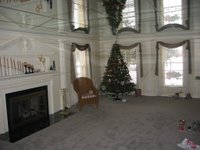 The house that my sister and brother-in-law just moved into has one of the weirdest living rooms I've ever seen - the entire living room ceiling is covered in mirrors. Here are a couple of pictures (a self-portrait of me and Diana, and a view of the room taken from the back toward the front of the house).
When she first told me about it, I kind of adopted a wait-and-see attitude. The first time I saw it I kind of thought "...hmmmmmm...I don't know about this". Then, after being there for a week it kind of grew on me. One problem is that it appears that the mirrors are actually glued to the ceiling which makes removing them one big, messy, and dangerous job.
What do you think???
Posted by The Big Finn at 12/20/2005 05:53:00 AM

I've heard of these in bedrooms, but in livings? I don't know. Who cleans the mirrors, and how? I expect that they intend to use the fireplace.

In California we always arranged things so as to minimise the chance they would fall on you in an earthquake, so the thought of a room full of mirrors on the ceiling kinda freaks me out (even if earthquakes aren't high on the list of worries in Chicago).

I just feel like I need to duck down in that second pic. It looks to me in the first pic the room is large but the second pic, it just keeps getting smaller and smaller. Reminds me of the funny exhibit in Lucern a bit where you can get lost in mirrors - at the lyons exhibit.