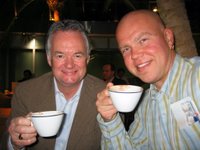 My trip to Chicago went like clockwork. The flights were on time, I had no unusual security hassles, and I even ran into my friend Dr. John at the Swiss Lounge at Basel Airport. We both enjoyed a cappucino, and then he was off to Hamburg and I was off to Brussels.
I flew on Swiss from Basel to Brussels, and then I boarded an American Airlines flight from Brussels to Chicago. I used 90,000 AA miles to book a round-trip business class ticket, and as I waited for the plane to take off I noticed that business class seemed to be totally full except for the seat right next to mine. "It's my lucky day!", I thought...until I saw an elderly lady with a cane walking down the aisle just before the airplane door closed. Now, I don't know about you, but I'm one of those people who prefer to not have to speak to the passenger who is seated next to me....
Betty is from Ft. Worth, TX, she worked for American Airlines for 33 years, she has diverticulitis, she was visiting friends in Brussels, she has been having trouble with her legs and now needs somebody to cart her around in a wheelchair throughout the airport, she is 74 years old, she can't believe that AA now has plastic forks and knives in business class, her husband died a few years ago,....and on and on for the better part of 9+ hours.
Nothing worked for me. I'd put my ear buds in and listen to my iPod and stare out the window - she'd tap my shoulder and share other unsolicited details of her life.
The meal service was especially fun. We were served warm nuts with our drinks. "Ummm...should you be eating nuts if you have diverticulitis?", I thought. "I can eat cashews...they don't bother my diverticulitis", she said as if reading my mind.
There was one point after dinner when I figured it was a lost cause, and I actually decided to initiate conversation. If you can't beat 'em, join 'em...right? As I stared out the window, I said something like "it sure is clear outside...". Dead silence. I glanced over, and Betty began snoring. I decided to follow her lead. I closed my eyes. Just when I was beginning to doze off, Betty decided to go to the bathroom. I can only say that Betty getting out of her seat was akin to a cowboy riding a bucking bronco at a rodeo. Those few moments of sleep would be the only ones I'd get during the whole flight.
When we arrived at O'Hare, I wished her well and got the hell out of there before I ended up having to carry her carry-on bag for her. She was a nice lady...but I'd had my fill of Betty and it was time to move on.
My parents picked me up at the airport and we went directly to Nordstrom. It had to be my first stop. Because I've lost all this weight, none of my clothes fit me any more. I bought some trousers, casual pants, and a wool overcoat. Plus, I had a sportcoat altered. We stopped for a late lunch at Ruby Tuesday, and then we drove to my sister's house. 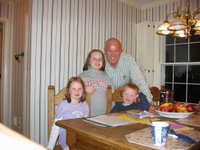 My sister (Diana) and her family just moved to a bigger house a few weeks ago. Mrs. TBF and I had driven by the house when we were in Chicago six weeks ago, but this was my first time inside the house. Nice house. It needs a little updating (the previous people were big wallpaper fans!), but overall it was in move-in condition. It certainly gives the family room to stretch out a bit, and it also gives more room for the kids to use Uncle TBF as their own private monkey bars.
Here I am, shortly after arriving, with Kiera, Fiona, and Finn. 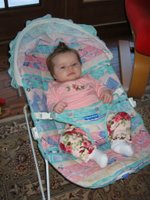 Diana had her fourth child in September. When I was in Chicago in October, Sinead pretty much slept all the time and I rarely saw her with her eyes open. Here's Sinead the "conehead" at approximately two months old. Let me tell ya, this kid has a good set of lungs. Plus, she has some major league gas! That must come from my brother-in-law's (Colm) side of the family.
Diana's side of the family doesn't have gas.
Posted by The Big Finn at 12/15/2005 03:57:00 AM

saying someone doesn't have gas is like saying "I don't know how to fart". haha

I've been looking for Betty's blog to see if she was saying the same things about you?!?

Whenever I'm in the airport now I just put my head down and read a book, if I look at someone or make a joke about someone they'll be the one sitting next to me on the plane, I've learned my lesson!