Gorillas In The Sist (ine Chapel)...

God...that's awful! It's a play on "Gorillas in the Mist"....oh...never mind. Let me explain.
A little while back, Michael recommended a handy little gadget called a Gorilla Pod. I checked out his link, liked what I saw, and (being a guy who likes gadgets) ordered one. I had it sent to Perry and Renee's house, and then they brought it along when they came for their little visit (thanks!). 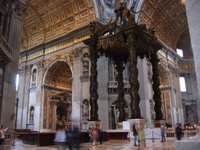 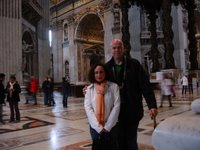 I have to say that the Gorilla Pod comes in really handy because it will attach to just about anything, and it let's you take photos that would otherwise not be possible. Here are a couple I took in St. Peter's Basilica without a flash. I always laugh to myself when I see people taking a picture of something huge like St. Peter's with a flash. I have news for you people: THE PICTURE IS GOING TO LOOK LIKE CRAP!!! Turn off your flash, put the camera on your new Gorilla Pod, set the self timer for 2 or 10 seconds so that the camera is absolutely still when the shutter clicks, and voila! Oh...and if you're in the picture, stand still so that you're not all blurry. That's my photography tip for the day. No charge! 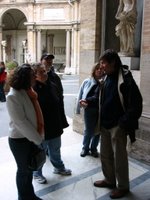 We ended up hiring a private guide to tour the Vatican museums and Sistine Chapel. He was highly recommended by our hotel concierge, spoke excellent English, knew everything there is to know about the Vatican/popes/etc., pointed out the best place to buy souvenirs, etc. He had only one fault as far as I'm concerned. I don't know...call me crazy...but about 20 minutes into the tour, I began to notice that he was spending about 95% of his time speaking directly to Mrs. TBF!!! Mrs. TBF says it's because she was paying the most attention and acting the most interested. OK...I admit I have a very short attention span, and after a while I was becoming more interested in trying to find out if the Gorilla Pod would attach to a marble statue, etc. But, I still say there was a hint of "workin' it" goin' on there. Toward the end of the tour, he even GAVE HIS CELLPHONE NUMBER to Mrs. TBF in case we (HA!) would want a "special tour" of assorted papal regalia, etc. He asked if we (HA!) were going to be in town on Wednesday so that he could get us (HA!) tickets to be in the Pope's audience. 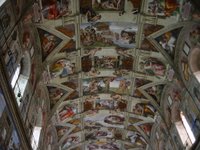 I guess I may be guilty of a little writer's embellishment here. He really was an excellent guide. Afterall, he didn't even yell at me when I set up the Gorilla Pod and took this illegal picture of Michelangelo's ceiling in the Sistine Chapel. I'm not using the guide's name here because I didn't want to embarass him in case he does a Google search on his own name, or finds my blog while trying to find Mrs. TBF (...just kidding!). If you're going to be in Rome and you'd like a private Vatican guide, just let me know and I'll give you the guide's cellphone number. Mrs. TBF keeps the number in her wallet.
Hmmmm...
Posted by The Big Finn at 3/13/2006 04:30:00 AM

His phone number is NOT in my wallet!!! It is in the little notebook you gave me for the trip and that is in my black purse. I will be putting it in the Rome top ten book, because his tour makes the top ten in my book!

Quit the bickering, you two!

I can indeed attest to the wonders of the Gorilla Pod...

Gorilla pod? Was is das? Must go google it now, these pictures look great!

(For some reason I can't leave my name on Blogger, but this is Rebecca from Adventures in Switzerland)