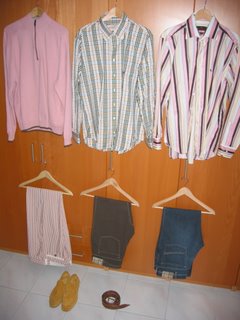 We're back from our very quick (too quick!) weekend in Siena, Italy. Our friend Ronny turned fifty, and a bunch of people converged on Tuscany from all over the place to celebrate the big occasion. The drive took a little longer than expected because of massive traffic around Florence on the way there and Luzern on the way back. But, we survived.
As usual, we ate and drank very well. We also managed to squeeze in some sightseeing and shopping. Once again, I planned on buying NOTHING and ended up coming home with quite a haul. Saturday afternoon:

Mrs. TBF: "Are YOU going to buy anything?"

TBF: "I need absolutely NOTHING!"

A few minutes later, I saw some crazy looking Italian, seersucker pants in the window of a store called Cortecci. One hour later, not only did I walk out with the pants, but I also had two shirts (one of them...very Chav!), one cotton sweater, two pairs of jeans, one belt, and one pair of "goldenrod" suede shoes. I was in sales for fifteen years, and let me tell you, the salesman at the store had some serious sales talent. "Mister...let me show you one more thing..." was his big line. And...it worked. I finally put a stop to things when he brought out a suit. I kind of think Mrs. TBF wanted me to buy it, but it ended up being a good thing that I held back because we were barely able to fit all our stuff in the trunk of the car for the return trip to Basel.
I just loaded the pictures into the computer, but I have some things to do this afternoon - so I'll post some of them a bit later. Ciao!
Posted by The Big Finn at 3/28/2006 06:30:00 AM

oh lucky you. I'm so do for some good shopping. I'm sure a certain someone must be jealous... Can't wait for the pics.

Lucky you - I lived in Siena for a year and it is the most fantastic city. If you're staying for a few days, you must try the "spaghetti alla marinara" (seafood spaghetti) at the 'Bandierino' restaurant on the Campo - it really is the best.

act -
We actually DID eat at the Bandierino restaurant for lunch on Saturday (our tour guide recommended it), but we only had pizza.