Mrs. TBF, Jo Mama, and I went out to dinner with Drs. Andy, Di, John, and Rammy last night. We went to a place called Balthazar (sorry, no website), and it was really good; good food, big wine list, and good service - a rare, Swiss, triple thumbs-up! The waitress even exhibited signs of a sense of humor by laughing when I ordered "...für meine liebe Schwiegermutter, ein bischen Essigsaft und ein alter Schuh!" (...for my dear mother-in-law, some vinegar juice and an old shoe!).It looks like they have a really nice outdoor seating area, so we'll have to go back for a little al fresco dining once the weather warms up a bit.

After dinner, we were all in the mood for a little more wine. The kids are all away at swim camp, so the parents had no curfew. We all took the tram back to our apartment and opened up a couple of bottles of wine.

Then, the "green fairy" made a rare appearance... 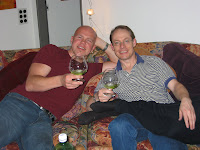 It was almost exactly one year ago when Andy and Di came over dinner. For some unknown reason, we decided to break out a bottle of absinthe that I had bought in Spain a few years back. We didn't really know how it should be served, so we decided to have it in a snifter with a couple of ice cubes...and the essence of Di's feet. It wasn't until much later, that I found out from Sal's blog that one is supposed to dilute absinthe with water at a ratio of about five to one. Oops! 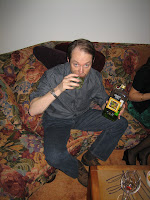 Did we learn our lesson? Obviously not! Last night, we once again enjoyed the "green fairy" with a couple of ice cubes. Andy especially enjoyed pointing out the fact that absinthe is 70% alcohol...while he sipped away.

Suddenly, Andy stated that he'd had enough, and he walked into the kitchen to dump out the absinthe that remained in his snifter. A couple of minutes later, he and Di were heading home in a taxi.

Email ThisBlogThis!Share to TwitterShare to FacebookShare to Pinterest
Labels: absinthe (how not to drink it), Balthazar, green fairy

Must I personally go to Basel and set you two straight?

What I find most amusing is that in photo 1, Andy is drinking from a sifter. In photo 2, he is drinking from a highball glass. That tells me that he had at least two undiluted absinthes; which would put most people on the liver donors' waiting list.

But why two different glasses? My suspicion is that after downing his snifter, he began jumping up and down on the sofa making chimp noises, and then grabbed the glass of absinthe that Mrs. TBF was nursing and downed it in one mighty gulp.

He also seems to have lost his glasses, changed his shirt, and aged several years by the time of that second glass.

Or perhaps that story is the exclusive domain of the taxi driver.

BTW...love the new profile photo. That old photo of you standing there with fireworks exploding over your head always made me think of Bobby Brady kissing Millicent.

-El Tragger, whose wisdom and experience continue to be recklessly dismissed-

Excellent Brady Bunch mention. I remember the Millicent episode as if it was on yesterday.

It tastes like licorice. Kinda like Sambuca or Ouzo on steriods. It is usually diluted with 3-5 parts ice water; with the water being slowly poured over a sugar cube resting on an absinthe spoon suspended over the glass.

It's a drink that Johnny Bravo would definitely like.

I like the absinthe, but prefer to drink it from a shot glass. No ice, no dilution, just the way it comes from the bottle. It has an anaesthetic effect. After a few shot you notice your lips going numb.

Appearantly the Dutch painter van Gogh painted his best art work while being high on absinthe (and cut his ear off). Absinthe was very popular in those days.

Glad to see that you guys still have both ears...

OX - It's good to hear that you take your absinthe like a man! We'll drink some in the Fishbowl this summer, and....then we'll try to keep each other from jumping.

What does that make me, then?? I also drink it pure. I drink like a man?? Scary!

I'm jealous, I've been wanting to try absinthe for the longest time but can't find it here.

You European Kids get to have all the fun with hallucinogenic drinks!!!!

Glad that you discovered that it is best to dilute real absinthe. You could also try some of these absinthe cocktails on my absinthe blog: