I'm one of those guys who needs a vacation after taking a vacation just to recuperate from the added stress encountered during the vacation. Add in any kind of time zone change, and Fuhgeddaboudit! 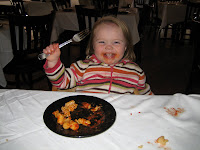 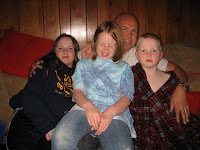 I really enjoy going to Chicago to see friends and family. Really! However, I have to say one thing: ...love the nieces and nephew, but...they exhaust me! And to think that I'm exhausted after seeing them just for a few hours a day for a week here and there unlike my sister and bro-in-law who have to deal with these whirling dervishes every single day.

...an appointment with my doctor to discuss a vasectomy has already been set up for next week!

Dinner is especially hectic. I'm used to Mrs. TBF and I sitting down to a relaxing dinner. Sure, King will come by occasionally and beg for a little something, but that's about as hectic as our dinners get. Now, add four kids to the dinner table and things change...a bit. Certain words come to mind; chaos, bedlam, pandemonium...just to name a few. One evening, about an hour after dinner, my mom actually had to ask me what we had eaten because...she couldn't really remember.

Lots of distractions at dinnertime at my sister's house...

So, yes, I'm exhausted. Add into the equation that my flight left Chicago 90-minutes late on Wednesday resulting in me having to walk/run through Heathrow to catch my connecting flight to Basel. I landed at Heathrow at 7:50, caught the bus from Terminal 3 to Terminal 4, went through Security (after pretty much cutting in front of everybody in the long line), and parted the sea of travelers in Terminal 4 who saw in my eyes that I was prepared to kill (...only had to stiff-arm one person) as I made my way to Gate 19. I made it to my gate and boarded the plane (last person to board) while receiving many kudos from the incredulous staff who couldn't believe that I had made it. The door closed about a second after I got on the plane. Yes, I had made it, but...

The luggage was delivered last night; one around 21:00, and the other one shortly after midnight.

This morning, I drove Mrs. TBF to the train station so she could catch the 7:03 train to Vevey.

Glad you made it home safe and sound.

I always enjoy the time when I'm around kids...but I'm so glad when it's over.

At least you were coming home and lost your luggage instead of getting there and not having it.

Every parent says it's worth it...

Happy to hear you made it back safely. I know how it feel coming back from a vacation and actually needing a vacation to recuperate from the vacation!

Hehe, seems like your brother has contributed his and your part in creating the next generation of Big Finns, and now you get to be the fun uncle (not to be confused with the funny uncle)! Not a bad deal, I'd say;-).