Riquewihr is a medieval town in the Alsace about an hour's drive from Basel. We've been there many times with many different people. However, we recently realized that we haven't been there for nearly four years. It was time to change that...and yesterday was the day. The three of us jumped into the Jeep and made the one hour drive up to Riquewihr.

The Jeep must be exhausted. I think I've driven more in the past two weeks than I did during the first ten weeks of 2007. Plus, the speed limit on the highway in France is 130 kph / 80 mph! I'm sure the Jeep is still trembling down in the garage. 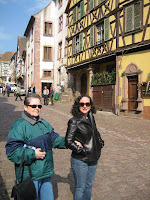 We made it to Riquewihr around 11:00 a.m., walked around a bit, sampled/bought some Rieslings at a wine dégustation, and then made our way to one of our favorite places for lunch - Au Cep de Vigne. 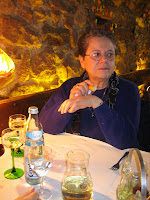 I'm not really sure why (maybe because it was a Tuesday), but nobody else dined in the restaurant the whole time we were there. The food (Alsatian specialties) is great, the setting (in an old wine cellar) is really unique, and the service (despite the language barrier) is very friendly.

After our 90-minute face-stuffing marathon, and a bunch of mercis and au revoirs, we trudged up the stairs and made our way back out into the street. Another hour was spent going in and out of various shops, a few things were purchased, and then it was time to head back to the Jeep.

You'll notice that I didn't say that it was time to "...head back home". That's because we had one more stop to make... 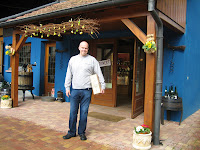 Whenever we go to Riquewihr, we absolutely MUST make a stop at the winery shop of "the Man" - Monsieur Edel - in the nearby town of. We just lucked into his little winery shop back in late 2000, and it has become one of those places that we can't drive by without at least making a quick stop to buy a few things. Unfortunately, Mr. Edel was in the house recovering from hip surgery, but we were well taken care of by his daughter-in-law (who happens to speak perfect English). We tasted some of their apricot liquer, and ended up leaving with that plus a couple of other liquers and some crémant.

We got back into the car, hauled-ass down the highway at 80 mph, and were approaching the Swiss border about 45 minutes later. Oh...I forgot to mention that Mrs. TBF had handed in her passport at work a couple of days earlier so that they could procure a Chinese visa for her for upcoming trip, so we had to "smuggle" her back into Switzerland. Fortunately, the Swiss border patrol had no interest in questioning our "lily-white" faces (they pretty much just seem to stop people of color), and just waved us through. 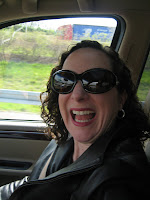 That's just about the same thing we did yesterday, and the day before! We only bought wine yesterday, as on Monday we didn't finish with our hike until just after 6pm, and the wineries were closed.

I am glad you notice the border smuggling. We got stopped at the basel borders ALL. THE.TIME.
Except for the time I was driving. WIthout a licence. They figured if a white girl was driving a brown guy around it must be ok.

I shall be reporting you immedjiately.

Me thinks that with the beautiful weather we're going to have these coming days, we'll also be doing a bit of travelling in the area.

BTW, I wonder if Mr. Edel has a bottle to go with the giant cork screw behind you in that 3rd picture.

Did you visit a Norstrom while you were there? Or are those only at Woofield?

I noticed on the website that they have a hotel there too, would that be a nice place to stay overnight? and is there a way to get there by public transport? Just curious...starting to get excited about the opportunities for travel from Basel! :) As of now, we're planning to move to Basel mid-summer for hubby's postdoc, barring any trouble getting our visas.

Beej - I've never seen the hotel part, just the restaurant so I can't comment. I doubt that there is any way to get there with public transportation. You could maybe get a train from Basel that would bring you within a few miles, and then you'd have to take a taxi. I'd say that it's better just to rent a car (if you don't have one) for the weekend and just use it to drive up and down the wine route.

I love that village! It was one of the first ones I ever visited back in 2002 in April in fact.

And mrs tbf reminds me of what I wish I could do right now. But unfortunately the can/us border isn't the same as the Swiss/French one. I never was asked for my passport either the entire 8 months I lived in France...