Jo Mama's back in Chicago now. Basel cooperated with nice weather (3.9 out of 5.0) during her stay, and it was a good visit overall. We each only got really angry with her one time...which isn't too bad at all.

I brought her to Zürich Airport yesterday morning for her 12:55 Swiss flight back to Chicago. This brings up something I've been wondering about for nearly seven years now...

What's the deal with all the Jewish people flying between Zürich and Chicago? I try to avoid Swiss as a rule because I think they suck as an airline, but on the few occasions I've flown Swiss to Chicago, the plane has been loaded with what I think are Hasidic Jews (dressed in black, wearing hats, men with curls at their temples). Yesterday, the Swiss check-in line was at least 75% made-up of men wearing yarmulkes, women dressed in black, etc. These were Americans and not people from Israel as was the case on my previous Swiss flights. Jo told me that the flight from Chicago to Zürich was the same. This fascinates me...

What's up with this? Why do so many of the world's 13 million Jews fly Swiss between Zürich and Chicago? Just wondering... Can anybody help me here? TBF needs to know!

Jo Mama's back at home, and all that's left of her visit is a pile of bed linens and towels that still need to be washed, a few empty bottles of prune juice that need to be recycled, and a few pictures that I finally uploaded into the computer. Here are three of my faves... 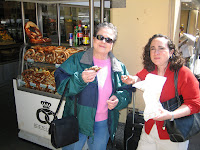 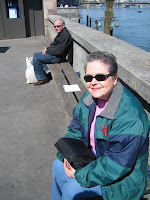 Jo Mama has been a widow for nearly ten years now. Whenever she comes to Basel, we always tell her that we're going to hook her up with a rich, elderly, Swiss gentleman. If we see somebody that fits the bill, we'll just say "suitor!" to see if she approves.

Here is a rare photograph of Jo Mama with one of her "suitors". The guy is obviously checking her out, and she is, like, totally ignoring him. WHAT A TEASE! 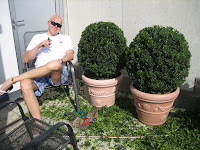 Whenever the experience that is "living with Jo Mama" would become too much for yours truly, I just retreated into the sanctity of the rooftop garden (The Fishbowl) to clear my head. I could just feel the eyes of all the Swiss people in the tall apartment building - which we call One Big Bruno - staring down at me because: I was wearing shorts and flip flops in April; I was wearing plaid Bermuda shorts that no Swiss person would ever wear; I was trimming the boxwoods into two giant testicles while sitting and smoking a cigar ("...like an old Dago!" Mrs. TBF's words, not mine!). DEFINITELY stare-worthy, I'm sure, as far as the Swiss are concerned.

Hey, now that I'm looking back at these pictures...

Nah, I think his eyes are downcast, checking out Jo Mama's ass end!

What big testicles you have, TBF, and shapely too.

And I thought all the Jews were on the flights between New York and Zürich! Except for Friday night, of course, when the Orthodox guys aren't allowed to travel. And it's not just Swiss, by the way. It's ALL the airlines.

When we lived in Zurich we flipped about all the Jewish people walking around...then we found out we lived in the Jewish part of town...at first I thought we were just self conscious Muslims.
I have often wondered the same thing, but then I stop wondering because then ultimately someone around me starts talking about Switzerland and Jewish people and money.

Hey, when you're hiking, what is what the swiss call a "piste finlandaise"...is it the woodchip piste or what?

There's something wrong with a scenario where it's April and you're wearing shorts in Basel and we're wearing jackets and gloves in Washington...you should be struggling through gray, drizzly days wondering if spring will ever arrive, while we should be basking in balmy days with the dogwoods and azaleas in bloom...

cncz - I've never heard that expression before, but I would guess that it refers to a woodchip walking trail. I think they're pretty common in Finland.

Kirk - At least you didn't get hit with the snow that Chicago got sideswiped by yesterday. Jo Mama kept asking me about the weather forecast, and I kept telling her that her plane would be landing in sleet/snow with 35+ mph wind gusts. I wasn't too far off from the truth.

Kirk, I feel your pain and return it with a renewed sense of outrage (I wish I had come up with this sentence, but I'm quoting the TV show "Weeds" here). My friend in Zurich told me yesterday that after he ate lunch outside it was nice to cool off in the office in the afternoon. Meanwhile I looked out the window where huge snowflakes were peacefully falling and I almost got fooled into a belated christmas-spirit...

Btw, hello TBF! I have been lurking on your blog for a while, as I have on the ex-expatters' blog - thanks for the entertainment and have fun in the sun!

aena - Thanks for stopping by. Say hello to my cousin in Pierre Fonds!

I think they look more like boobs than testicles?!?

TBF, will do! I guess if Finns do look alike as much as you said in your Watch & Jewelry Show-post he'll be easy to spot;-).