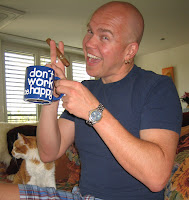 In the news today: Recent studies have shown that both smoking cigarettes and drinking plenty of coffee seem to reduce the risk of Parkinson's in people from families who are prone to the disease.

My grandfather had Parkinson's, and I also have an aunt with Parkinson's disease...

I currently drink three to four cups of coffee per day (much less than I used to), and I smoke an occasional cigar (one to two per week during the warmer months). Maybe I need to increase the coffee consumption and supplement the cigars with cigarettes.

What's next? Drinking beer is good for the liver? Eating a pound of bacon per day lowers cholesterol? Global warming is good for the Earth? Scientific research won't be contradictory?
Posted by The Big Finn at 4/10/2007 01:30:00 PM

I am personally hoping that chocolate with a fluid caramel center will lower blood sugar.

TSK - Did you ever really quit?

Dixie - The results of that study should be out any day now.