Adding A Little (More) Color To Our Lives...

Mrs. TBF and I went to an art gallery a couple of Saturdays ago, and we saw a couple of paintings by a Basel artist names Regula Mathys-Hänggi. If you'll recall, we bought one of her paintings about two years ago which we've enjoyed so much that we thought it was time to add another one to the fray. We couldn't decide between the two, so...we decided to buy BOTH of them. 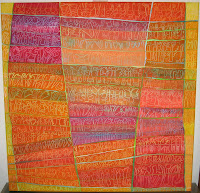 The one on the left is called Zeichensprache III, and the one on the right is called Engelsreigen. I know that Zeichensprache means "sign language", but I'm not totally clear on the meaning of Engelsreigen. I know that Engel means "angel", but the gallery owner couldn't tell me exactly what Reigen is in English (and I couldn't find it in my German dictionary). He told me that it's "...a kind of dance that's done in a circle...", so I'm going with "angels' merry-go-round" or "angels' ring-around-the-rosie". Buying the art was easy. Now begins the hard part; figuring out WHERE to hang it and HOW to hang it.

I thought I had the WHERE all figured out until our friends John and Rammy came over for dinner last night and I asked them for their opinions regarding where the paintings should be hung. Imagine my surprise when they convinced Mrs. TBF that I should hang the paintings in completely different spots than I had picked out. Naturally, this involved me having to spend the better part of this morning moving living room furniture, the liquor cabinet, and a cabinet that holds about a zillion glasses (THANKS, John and Rammy! Aaaaaargh!). The net result? I'm going to veto it. Yup, I'm thinking that my first choice will be the better choice (of course!), but I'll wait for Mrs. TBF to get home from work tonight so that she can see it all for herself. Tomorrow (after Mrs. TBF comes to her senses and becomes convinced that my way is the best way), I'll move the cabinets back to their original positions and begin tackling the HOW part of hanging the paintings.

The one painting will be no problem because it'll be hung on a wall that appears to be somewhat hollow. However, the other painting is going to be hung on a wall that is part of the central staircase/elevator shaft of our apartment building. I've tried to drill into this wall before with absolutely no success whatsoever. Even with my hammer-drill, I've only been able to penetrate about 1/4" into the wall. Seeing that the wall is probably solid concrete, I'm probably going to have to hire a handyman to come over and drill two holes for me with some sort of industrial drill; probably the easiest money the handyman will ever make in his life! Either that, or I'm going to have to figure out where to buy the kind of plastic explosives that bank robbers use to blow open bank vaults. However, one way or another, the paintings will eventually hang on our walls along with their "big sister" - Sterngucker.

I pointed out to Mrs. TBF this weekend that someday these paintings will be hanging in our house in the U.S. (most likely in Chicago). With three of Regula Mathys-Hänggi's paintings now in our collection, is it possible that we may someday have the largest collection of R.M.H.'s art in America? I guess I shouldn't say anything because there might be some kind of law preventing me from taking them out of Switzerland. Perhaps I'll just have to paint something over the originals right before moving day comes, and then just scrape off my artwork after they're unpacked in the U.S.

Email ThisBlogThis!Share to TwitterShare to FacebookShare to Pinterest
Labels: my way is often the best way, Regula Mathys-Hänggi, words I can't find in my German dictionary

Oooh, so pretty! I love those. And yeah, your definition is right - you could call the second one "Angels Dancing in the Round" or something.

Whatever you do, do NOT hang those paintings between the hours of noon and 2pm.

christina - I guess it's one of those words that just doesn't translate well to English; kind of like the Finnish word...löyly.

fat sal - I wouldn't even dream of it because I'm a well-behaved, rule-following foreigner.

The artist is related to Ellen's orthodontist and he has some of her pictures in his surgery. Its nice to know that when I pay E's bill I'll be investing in art.

Gill - ...and in a beautiful smile for your daughter!

Those are beautiful! Thoughts of color....

So, where did they end up?

Welcome to the wonderful world of blogging!

I LOVE the paintings!! LOVE them!!