...brown, can rip your arm out of it's socket during a walk if you're not careful, afraid of King, and will be staying with us until Saturday evening?

See? I told you that maybe we'd have another dog in the house sooner than you think.

This is Puppy, and he arrived at our house last night around 9 p.m. Size-wise...he's a beast, but personality-wise...he's as gentle as a lamb. He is (according to his "mommy") part Great Dane and part Rhodesian Ridgeback - and, I think, part scaredy-cat. We brought him over here a couple of weeks ago for a little test to see how he and King would react to each other, and I saw instantly that King was dominant when he began walking curiously toward Puppy to check him out and...Puppy whimpered.

So far, so good. Puppy survived his first twelve hours in our house with only a few bitch-slaps to the face from King. 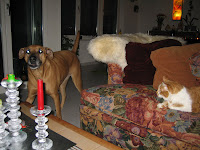 They seem to be curious about each other, and actually are now sleeping about a meter apart from each other as I write, but they're definitely not to the bosom-buddies stage yet. If King needs a break from Puppy, all he has to do is go into one of our bathrooms. 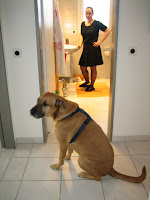 For some reason, Puppy will NOT set one paw into a bathroom - so much for my idea of letting him use the toilets as his personal water bowls!

So far, the only minor problem is that they seem to be interested in each other's food. We can block King's food off from Puppy by keeping the kitchen door cracked open only enough to allow King to get through. But last night we caught King actually scooping Puppy's kibble out of his bowl and then trying to gnaw at it with his few remaining teeth. Then, in the middle of the night, I heard King drinking Puppy's water. What is it with King the beast? Why does he insist on drinking water from any source in the house other than his own water bowl? What a psycho!

My main reason for offering to watch somebody's dog was so that Mrs. TBF could get a dog-fix, and then she wouldn't hassle me about getting another dog of our own - I definitely don't want another dog for as long as we remain in Switzerland. However, I have agreed to us getting TWO dogs (along with a bunch of other incentives)...WHEN WE MOVE BACK TO AMERICA! Aren't I mean??? Naturally, my intention with the dog-sitting was that we'd take care of Puppy together. And, of course, Puppy came to us on the last evening of a long holiday weekend which means that I - and I alone - am now responsible for the bulk of the Puppy watching duties; including cleaning up his MASSIVE Great Dane dog turds while he pulls me around the neighborhood during our "walks". How the hell did that happen?

I'm going off to the gym in a couple of hours. That'll be the first time I leave the two of them together in the house without "parental" supervision. I have images of coming home and finding Puppy breathing his last breath in a pool of his own blood as King prepares to feast on his belly meat. Hopefully, that won't happen.

Our cat drinks out of everything except his own water bowl as well.

My Roommate has a dog and I hate walking him because as soon as he does his business he tries to run away as quickly as possible.

It's difficult enough to manuver when you've got a leash in one hand with a tugging dog while crouching down trying to pick up dog shit with a plastic bag around your hand.

Awww. Puppy IS going to break both your hearts when he has to go back home. He's so adorable! AND he's also afraid of Dale.

BTW, we saw Sam walking him yesterday evening, or should I say Puppy was walking Sam?? I'm sure we'll read more Puppy/King adventures in the coming days. I can't wait! :D

Oh come on, tell us, tell us. You must be back from the gym by now! Was there any blood shed??? Did ruthless, teethless King tame the big bulky Puppy?? I hope it wasn't too messy :-)

It looks, to me, an awful lot like Jasemine.