Three Boys And A Sugar Mama... 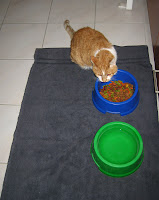 No blood has been shed. As a matter of fact, King and Puppy seem to be living in harmony; no chasing, no barking or hissing, and very little swiping. Although King continues to assert his alpha-maleness by eating (more like licking) Puppy's food and drinking his water, he does seem to be warming up to Puppy's occasional sniff. It's not too different from when we had Dominique - except that Dominique wasn't as docile as Puppy.

Having a dog around this week has reminded me of just how much of a commitment it is having a dog. Normally it's pretty easy having just King around. Yes, he complains a lot, needs to be fed multiple times per day (with medicine), and requires his boulders to be cleared out of the litter box on a regular basis so that the whole apartment doesn't stink. However, he doesn't need to be walked. I've forgotten how much time that takes and how much it can disrupt the day. It also doesn't help that I've had a relapse of my man-cold, my sinuses are completely clogged, and having to go outside in the cold to walk the "Clydesdale" hasn't been on the top of my list of things I WANT to do. Also, there's A LOT more fur around the house. I normally vacuum everyday, but I'm thinking that two-a-days might be more in order; man-cold has caused me not to feel like doing that either. 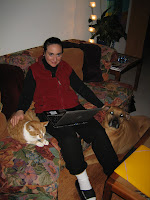 Sure, I've promised Mrs. TBF that we can have two dogs when we move back to Chicago...whenever that is. However, who wouldn't want a dog when most of the pet work had been done during the day and all you have to do is come home (so that you can continue your workday) and bask in the glory of two pets (and a man-cold sufferer) who are happy to see you.

Don't get me wrong. I've actually enjoyed Puppy's company - he's a very sweet, well-behaved dog - and I'd let him stay here again, BUT...

I'm not ready to be owned by another dog...yet. Ever? Well, I promised.

Email ThisBlogThis!Share to TwitterShare to FacebookShare to Pinterest
Labels: King and Puppy living in harmony, not ready for another dog, two-a-day vacuuming, walking the dog

Puppy looks like just the kind of dog I'd like to have, at least if our current dog wasn't driving us so crazy that it's making future dog ownership seem much less appealing. And really, few things suck quite as much as having to get up early (especially when you feel like crap) and walk the dog when it's freezing cold and raining.

So... Just out of curiosity...Did you also vacuum twice a day when you had Dominique? And look on the bright side: With two dogs, you get regular exercise every day for free! No more gym fees ;)

Yet another person with a PhD cannot figure out how to leave a comment on my blog, so I have to leave it for them.

TBF - Your 2 blog accounts of Puppy and King's dynamic made me laugh out loud. "Bitch slaps? - King would not like that term [I had to respond to Di and explain to her that Puppy, as the receiver of the slaps, would be the bitch]. I like how you and Andy refer to Puppy as allowing me/Mrs. TBF to get our dog fix...you both love a dog like Puppy - admit it!;)