From Beast To Boy... 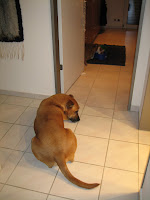 Puppy is back home again with his "real" family. And I'm sure he's happy about no longer having to compete with King for his own food.

OK... It's one thing to trust us with watching somebody's dog. I mean, we did have a dog for many years, and we're pretty much experts at it - so no big deal. However, it's another thing when somebody actually trusts us to watch their child - something with which we have absolutely no experience. And - believe it or not - that actually happened this past weekend.

OK, OK! I know Olli's not actually a "child" (he's fifteen), but the fact that we were responsible for his well-being for 24 hours while his parents were in the U.K. (another country, even!) kind of makes me feel all growed-up! 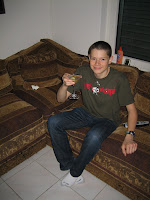 As Puppy left, Olli showed up. I had big plans of putting him to work, but having just returned from a two-week swim camp in Italy, he seemed a bit tired. So, I ended up being soft on him and didn't make him fetch me a drink and barbecue our steaks as planned. As a matter of fact, I fixed HIM a martini - ...just joking! He was posing with mine! - and then we served him up some grub. At one point, I caught him cutting the fat off his steak (THE BEST PART!!!), and I told him that his mom was in a different country AND that I wouldn't tattle on him if he ate it. Da Kid still wouldn't eat the fat - so I picked it off his plate and ate it myself!!

Kids! What are ya gonna do?

After dinner, we all pretty much just sat around watching TV. I didn't even have to walk him OR pick up his poop. Imagine that!

The next morning, after waking the slug up at 11:30, Mrs. TBF prepared a HUGE breakfast. Then, Olli just proceeded to watch TV until his parents showed up.

Email ThisBlogThis!Share to TwitterShare to FacebookShare to Pinterest
Labels: acting all growed-up, King and Puppy living in harmony, Oliver, Ya gonna eat your fat?

You eat the fat from the steak?! I'm more like Olli, in that case. I'm also very happy for you that he's toilet trained, but at that age, I guess you'd kinda have to expect it :)

CS - Of course I eat the fat! It's the best part!!!
And yes, Olli is toilet trained, but apparently he's not pick-up-my-snotty-tissues trained.