Mrs. TBF's favorite show is a British show called MasterChef - we watch it every night. If you want to see what we watch EVERY NIGHT OF THE WEEK (except when Mrs. TBF is out of town), click here.

MasterChef is a cooking show where amateur cooks compete by preparing dishes for two food professionals/judges. The winner of each show passes on to the next round. Eventually, one chef is left standing, and he or she is crowned MasterChef! I'm not really sure what happens after that, but according to the hosts, it's something that "...will change their life FOR-EVAH!!!" Again, I'm not really sure how.

One of the tests on the show is that the contestants have to prepare a meal using a "mystery basket" of goods. The ingredients are unveiled, and the aspiring chefs have fifty minutes to prepare a meal using some (or all) of the ingredients. Last week, Mrs. TBF asked if I'd pick out a "mystery basket" of ingredients to see if she could come up with a meal like on the TV show. I told her that there was NO WAY IN HELL I was going to walk around Basel with a wicker basket full of groceries, but then she assured me that I could just put them in a normal shopping bag, so I said: "Sure...why not?"

This past Saturday afternoon, we went to the local Globus. After snarfing down a hot dog at the BrezelKönig stand just outside the store, I walked into Globus's little grocery after telling Mrs. TBF to lose herself in the main part of the store for 15 minutes. She ended up buying a candle, and here's what I bought:

Mrs. TBF: Quark? QUARK? What the heck am I supposed to do with quark?

TBF: I have no idea!

Unlike the show, I unveiled the ingredients well ahead of cooking time - while we were on the way home on the tram. I figured that I'd increase the odds of the dinner being really good if I gave her some time (24 hours) to think about it. Much to my surprise, as soon as we got home, she told me that she had already figured out what she was making. 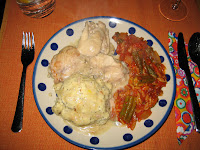 Here's what she ended up making:

Chicken and dumplings (made with quark instead of milk) with a side of casserole containing the orzo, sun-dried tomatoes, and okra. For dessert, she made a pumpkin creme brulée. Unfortunately, I immediately fell into a post-dinner coma and was unable to take a picture of the dessert.

Overall, I'd say that the chicken and dumplings were really tasty, and the side-casserole was decent - but not something I would beg her to make again. The dessert? Fantastic!

As a contestant, she shows promise. Will she get through to the next round?

The food looks great, it doesn't surprise me that Mrs. TBF would come up with such a fantastic dinner with what you gave her.

Did you get to watch Gordon Ramsey’s Kitchen nightmares USA? Now that was fun!!Mind you if they took the word f..k out of it there wouldn’t have been much of a program left!!!

I also LOVE me some Masterchef, but, like you, was perplexed as to what the contestants are actually "winning" at the end of the show that will "change your life forever"... So I went on the BBC website where I found a "Where are they now?" page on past MC contestants. Read all about it at http://www.bbc.co.uk/food/tv_and_radio/masterchef/masterchefalumni_index.shtml. Enjoy! :) Liz

I'm not surprised AT ALL! With her cooking talent, you should really send her to that show. I sometimes think of her when I watch "Das Perfekte Dinner" where not only the food, but also the decoration and hosting qualities give points. I think she'd win pretty much hands down, but she'd only need to polish up her German ;)

Michael - My only objection to her chicken and dumplings was that she removed the skin from the chicken. That's the best part as far as I'm concerned!

Mark - We did watch the Gordon Ramsay series. It might actually be my favorite show on TV right now.

Liz - I'll have to check that out. Thanks.

CS - I think she'd need a little more than polishing up; maybe a grinding wheel.

Mmmmm... pumpkin creme brulee. I need to get me one of those little kitchen blow torches.