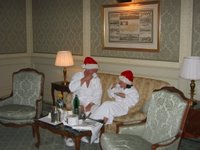 A very bleary eyed TBF answered the door of his and Mrs. TBF's junior suite (thanks for the upgrade Leaders Club!) this morning at the unGodly hour of 9:00 a.m. sharp! Oh yeah...I guess we did order a pot of coffee for between 9:00 and 9:30. I guess I was just hoping for a little closer to 9:30. A couple of cups of strong coffee was just the right antidote for the previous night's gluttony at Steirereck...but more about that incredible dinner a little later... 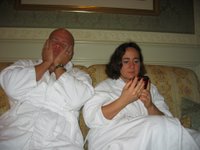 With a couple of cups o'joe in her, Mrs. TBF decided it was time to check out how her other traveling companion, Mr. Blackberry, was doing (it might actually be Ms. Blackberry...I haven't mustered up the nerve to check yet). Fortunately, the Blackberry was only out for a few minutes. I now realize that I was duped...(or, ich bin duped as I like to say). Mrs. TBF told me that she wasn't bringing her laptop along on this trip. I kind of rubbed my eyes incredulously when she told me this, followed by a "What did you do with my wife?" comment. But now, I realize that the Blackberry is pretty much just a smaller version of the laptop, and it means that Mrs. TBF will probably still work more hours on this mini-vacation (per usual) than I did during a normal work week back in my days of indentured servitude. 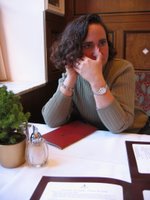 Here's another picture of Mrs. TBF taken with her other traveling companion, Mr. Cellphone (pretty sure it is a "he"), taken yesterday afternoon at the Mozart Cafe in the heart of Vienna. I have to give Mrs. TBF credit...she conducted her bidness in a very discreet manner while I enjoyed my Tafelspitz und leberknödel Suppe (liver dumpling soup). I'll add this picture to my rather large photo collection called "Mrs. TBF Doing Business While on Vacation". It's a rather large collection including pictures of Mrs. TBF using her cellphone or laptop in Hawaii, Helsinki, Paris, et al.
Here's today's strategy: the safe in our room is controlled by my credit card. So, maybe I'll throw Mr./Ms. Blackberry and Mr. Cellphone into the safe, lock the door, and then help Mrs. TBF get over her separation anxiety by taking her on a nice walking tour of Vienna.
Sounds like a plan to me!
Posted by The Big Finn at 12/23/2005 04:08:00 AM

Good plan, TBF! I'm sure Vienna will offer enough to keep her mind off business. Although I would maybe consider the fact that if her boss tries to reach her, he'll only get the echo of your safe...

Did you have the bellboy hang around and take those pictures...they're GREAT!

Nope...I just put the camera on a shelf and set the timer. You don't have to tip a shelf.