I'm leaving for Chicago tomorrow morning, and I still have to make dinner and pack. So my weekend update will be a little on the short side:

Friday evening: Mrs. TBF and I went to dinner at Charlotte and Alban's apartment. Charlotte is our French teacher. We had a nice relaxing evening, ate some really good food (especially the dessert!), and then walked home because they live less than a ten minute walk from our apartment.
Alban offered to drive us home which resulted in us saying something to the effect of: "What do think we are...Americans?!?!?" We had a lot of champagne, food, and wine in our stomachs, so the walk and fresh air did us good. 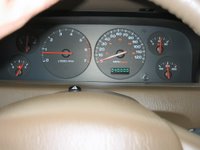 Saturday: We ran some errands during the day (the highlight was buying a 50 CHF/less than $40 U.S. DVD player that plays both European and North American DVDs) and also stopped by to see Sam. Sam is Diagnostic Dave and Mrs. Diagnostic Dave's 15 year old black Lab who was attacked the night before by another dog. When we arrived, Sam walked over to us looking for a little cuddle. Then, five minutes later, he was snoring away in his bed. Sam is fine! On the way home from the DxDaves, our car's odometer hit 40,000 miles. We bought the car on October 16, 1999. That means that it took 6 years, 1 month, and 27 days (2,250 days) to go 40,000 miles. How's that for boring Big Finn trivia?

Saturday evening: We went to a wine tasting at Andy and Di's house. The theme this month was Swiss wines. Now, we're not members of this wine club, but the hosts of the party get to invite an "outside" couple, and we were it. You may have read on a previous blog entry that we've gone to a couple of these before. Like I've said before, we're not wine experts by any means, but...the last time we went to one of these things at John and Rammy's house, we came in second place in the wine tasting competition. This time...WE WON!!! We couldn't believe it. Could it be that we know more about wine than we thought? Maybe I'll have to get one of those silver cups that you wear on a chain around your neck. It might look nice with the Tommy Bahama shirts. We got home in the very wee hours of Sunday morning... 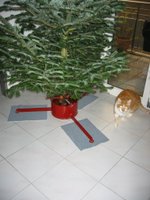 Sunday: ...and after waking up at 11:15 a.m., and enjoying a nice breakfast made by Mrs. TBF, we went about decorating the apartment for Christmas. We actually got a big tree this year. Our current apartment is about 35% bigger than our old one, and that little bit of difference meant that we had room for a tree on the floor rather than a table-top tree like we've had the past few years. We were even able to bring out the monster Christmas tree stand which we've never been able to use in Switzerland before. This baby holds two gallons of water and is made of cast iron. I think I remember when we bought the thing about eight years ago that the brochure said it could hold a 600 lb./273 kg. tree! That would be one honkin' tree, let me tell ya!
Mrs. TBF made some homemade gnocchi, a venison sauce to go with it, and then we were absorbed by the furniture in the T.V. room and watched a little NFL. That's about it as far as the weekend goes.
Like I said at the start...I leave for Chicago (connecting in Brussels) from Basel tomorrow morning at 7:15 a.m. I'm bringing the laptop, so the next time I blog will be from the "Windy City"!
Posted by The Big Finn at 12/05/2005 12:09:00 PM

It's amazing how little you have driven! But it's rather cool when you think about it because I'm sure you are walking and taking public transportation more often.

Looking forward to hear about TBF's adventures in Chicago! BTW, I don't do much more mileage/year either.

Yum venison sauce, you know in the states everyone would say ick, but they don't know do they?