One of my many responsibilities is going over to Diagnostic Dave and Mrs. Dx Dave's house every Wednesday and Thursday to walk their two dogs - Sam and George. Really, I don't think what we do actually qualify as walks. They're more like "pulls" - I pull Sam (he's 15 years old) and then George attempts to dislocate my shoulder by pulling me (he's about a year old). I end up walking them separately because past attempts to walk them together have always started well, but then ended up spiraling downward into chaos. 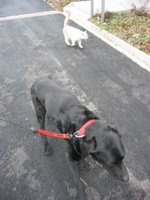 As I said, Sam is over fifteen years old and movin' kinda slow. But, his tail still wags when I wake him up from his coma, and he'll still gladly eat the abundance of treats - and my hand if I'm not careful - that I give him . Sometimes his "brother" Nuegli even joins us when we go for our 2-3 minute walk. 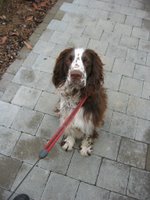 I used to always walk George first, but Sam's bladder isn't what it once was. So, now I walk Sam, give him his treats, and then let George out of his crate.
George is a bit of a wild beast. He pretty much mauls me the moment he gets out of his crate, but he seems to be settling down a bit (a very little bit!). Today, I nearly had a heart attack when I asked him to sit so I could take his picture, and he actually did! 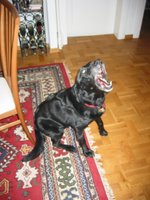 After my dog-duty, I made a quick stop at the grocery store, and then it was off to the home of the Expatters. I asked Kirk and Gretchen a while back if I could raid their CD collection so that I could download some of their stuff into my iPod, and today was as good a day as any. Moments after arriving I gave the official Expatter mascot - Grady - a couple of treats, and then he became...well...kind of rambunctious. He tugged on my pants and shirt a couple of times, he snorted on my back while I looked at the CDs, and he even looked as if he was going to begin humping my leg at one point, at which point I had to break out a can of whupass and show him who da boss! 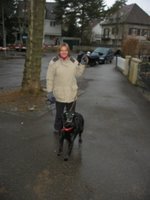 Since Grady was showing no signs whatsoever of calming down, Gretchen decided that the four of us should go out for a walk. That would be me, Gretchen, the bun in the oven, and Grady. I ran a little bit ahead of the pack so I could take this photo, waited for a second because Gretchen didn't want to be photographed wearing her Wisconsiny hat, and then we trudged on through the drizzle and gloom. Eventually, we made it back to the house. Gretchen and Grady seemed to by nice and warm, and I was frozen to the core.
I jumped into the car, blasted the heat, turned up the seat warmer to high, and then zipped down the hill back to the apartment.
Step aside people! I have a shopping bag full o' CDs to download into the Mac. Gotta stick to my schedule.

You ARE very busy, I see. so what about the coffee machine. Did it go on strike again?

ironically I can't tell which is the younger dog! My only guess is the push pull factor on the leash? And is that grady getting a treat? Scary looking mouth there. Ah an can of whoop ass - I don't you hear that much in Europe!

Sam, the black Lab is the older dog. George, the English Springer Spaniel with the halo over his head, is the one year old pup.
The picture of Grady was taken well after he received his treats. He was just protesting about having his picture taken.

Let me just say that I am totally humiliated by Grady's behavior today. He clearly was in a battle with TBF for "boss of the house"... and I'm still not sure who won...

Little does he know that his new best friend (TBF) may never bring him treats again after that way he behaved!

Awww..Grady's a good boy. He was just being a bit feisty. He kind of reminded me of our old dog Dominique. She could be the naughtiest dog in the world, but also the sweetest.
I think I'll go weep now...