When it feels so much better to just say YES!

Let's just say that I've noticed that I have this slight "problem". I've come to the realization that I'm a NO person. No matter what you ask me, my first instinct is to say NO.
I'm not really sure where this negative mien came from. It's possible it came from the many years I spent in sales. Customers would demand the world, and I then I, in turn, would take the completely opposite position (usually NO) as my starting point in the negotiation. Don't get me wrong. I don't think I'm a negative person. Just the contrary. I think I have a fairly positive outlook on life. It's just that I guess I prefer to say no, think things through, and then convince myself that YES is the way to go. Perhaps I'm a bit cautious. But, no more. I've decided to change. You see, I've decided to become Nouveau TBF.
Nouveau TBF is changing from NO to YES. Or, should I say YES with a caveat that the answer could become NO (so don't e-mail me asking for money!). I guess what I'm saying is that I'm going to switch from NO to YES with an asterisk. Let's not go crazy here, I'm not going to just say YES to everything. However, I am going to change my approach to how I approach things in general. Does that make sense? NO? Well...tough! I'm gonna do it that way anyway!
So, the first real test came about ten days ago. Mrs. TBF and I received an e-mail from our friend Rammy regarding Quiz Night at the ISB (International School Basel). Quiz Night is an annual fundraiser at the ISB which involves pitting your table against other tables in a trivia competition. I knew that Mrs. TBF would be in Chicago on Quiz Night, but I went ahead and e-mailed Rammy back to let her know that...YES!...I would attend. "Wow...that wasn't too hard, now was it?"...I thought.
Then, Rammy e-mailed back stating that she thought our theme (huh?) should be Helvetica (Latin? for Switzerland) Hippies and that we could all go dressed as hippies and that everybody could bring a dish. I began to feel the "N" word fighting to take over my brain. Mrs. TBF was in Zürich at the time of the e-mail. I called her for support, and she told me to just go..."You'll have fun!".
So I took Mrs. TBF's advice, made a crabmeat cheeseball (sorry...a secret family recipe which I will never divulge!) and a couple of frittatas (you bring your own food to Quiz Night and buy the drinks), put on a tie-dye shirt and a some borrowed things, and ended up having a real "groovy" time. 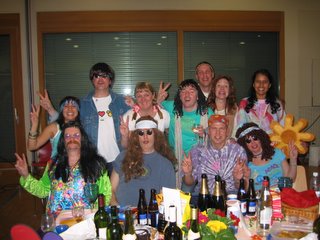 It turns out that it's a much bigger deal than I thought it was. There were a lot of people there, and many people (including our group) got really dressed up for it. Now that I look at the picture closely...MAN! There were a lot of "dead soldiers" on that table. I, fortunately, DID say NO to having too much to drink, and I drove a few of us back to John and Rammy's house for a nightcap. 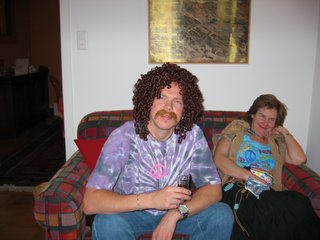 Because I figured that I'd end up turning into a sweaty mess, I opted for a bandana instead of a long hair wig. However, later in the evening, I said YES to trying on Rita's wig. Here's a picture of me looking kind of like Brad Delp of the band Boston circa 1975.
Hey...saying yes, it turns out, can be fun!
Posted by The Big Finn at 2/16/2006 09:00:00 AM

Ooooh! That moustache makes you look like Morgan Spurlock!

So that's what you look like with hair? hmmm...

Yeah I noticed all of those bottles too, good for your group!

So was there any Trivia at Trivia Night or is it all about getting dressed up?

The hair and moustache just makes me laugh. I'm glad you stick to the shaved look.. But it does look like it was a fun night. Congrats for stepping over!~

I'm liking the Brad Delp 'do. But you must admit one thing. When it comes to Boston hair, nobody can beat Sib Hasian's.

I'm afraid that we're showing our age, my friend.

That look like a great time you had there. And definitely a lot of dead soldiers on that table. Was that before you drove the people home, or at Rammy's.

Just a small piece of advise: if you have to dress up to get drunk, then forget about the dressing up. Once drunk you show the real you anyway! I hope the "curly TBF" wasn't the real you?!? The night you had looks like fun! Back to Woodstock! Peace man....

Ms. Mac - For the record, the mustache is fake too. Morgan Spurlock...good movie, bad mustache!

Michael - It isn't too long a stretch from how I looked in the late 70s. I used to get perms. Maybe that's what made my hair fall out?

Expat Trav. - Thanks. I like the shaved look too, but I often wonder what it would be like if I had Mrs. TBF's hair. Unfortunately, my hair would probably end up looking like the picture of me with the wig.

Sal - I saw Boston at the Chicago Stadium in 1978. Pre-"I can't drive 55" Sammy Hagar was the opening act. I do recall being rather mesmerized by Sib Hashian's 'fro. Showing our age??? Naaaaa!

C.S. - The dead soldiers were before I drove to Rammy's. However, I refrained and was totally safe to drive home. BTW...I still have a key to our old parking garage, so the Jeep wasn't parked too far away from your car during Quiz Night. However, it was a different story later in the evening. In the picture of me with the wig, I'm holding a rather large of Jägermeister. I ended up taking a taxi home in the "wee" hours.

Orange - I prefer to strip to get drunk. What does that say about me? God...I hope my mom and dad don't read this!

Sorry TBF, as you know the stripping part is my act...remember the thong man act?!?