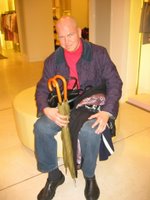 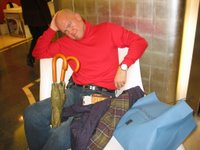 Paris/Saturday, February 18, 2006...
In a momentary lapse of reason, I actually volunteered to hold Mrs. TBF's stuff at Le Bon Marché while she shopped for clothes. Contrary to what I thought would happen, Mrs. TBF ended up not being gone for too long. Sadly for her, she was "shut out", didn't see anything that she liked, and came back empty-handed.
Then we walked to the mens department, and I ended up buying a jacket and pair of pants (happy to report that I now have a 36" waist) in no time flat. Hey...I'm a guy, which means that I try to buy things as quickly as possible in order to reduce the amount of time actually spent in a store.
Later, we made our way to Printemps which was holding a big sale. It was awful! Wall to wall people. I had to go pee, and while searching for the bathroom I ended up walking through the "Hell on Earth" that is the women's shoe department in the midst of a sale - ghastly! After returning from the bathroom, Mrs. TBF (sensing my pending crabbiness) instructed me to "...sit here while I go look around for a few minutes." The second picture is what I looked like...ONE HOUR LATER! Once again, she was shut out.
We walked over to a bistro, had a drink, took the Metro back to George V, and then walked across the street to the Lacoste store. Mrs. TBF ended up finding a sweater, and I ended up buying a sweater AND a shirt.
The day began with Mrs. TBF wanting to do some shopping. I didn't really plan on buying any clothes. The final tally: TBF - jacket, pants, sweater, shirt...Mrs. TBF - sweater and two pairs of socks
How did that happen?
Posted by The Big Finn at 2/23/2006 04:00:00 PM

It's frustrating enough for a woman to go shopping and come back empty handed, but for her hubby to come back with more than her is horrifying.

I ditto with CS. But I think last night I felt the same way as you after I had put away the laundry and couldn't find my shirt. Thus the glum face like you...

Wow, kudo's for you.

I think the only 'gay gene' I didn't get was the shopping one...oh wait, I didn't get the decorating one either.

When I go shopping I can be in and out of the store in 10 minutes and spent several hundred dollars.

I can never figure these people out that spend hours looking at things and wondering if they like it or not...if I don't like it in the first 10 seconds of seeing it, I doubt that I'll like it when I get it home!

Sorry, had to delete my previous comment. To many typos (still too early...)

Hey big spender! I definitely know the days when CS feels like shopping and comes back empty handed. The standard remark is always the same: "frustrating to see how you (that's me, Orange) can go into a store, step into clothes and it just fits".

Did the "hell on earth" show any real devlish shoppers? I hate sale where people are practically crawling over each other for the bargains and leave the mess behind when they can't find anything suitable.

Oh Michael, you'd love my favourite store "Herenglobus". You can be sure to walk in and out in ten minutes wondering if you shouldn't have bought that other piece of clothing as well ;-), but that'll be after the first few hundred are already gone..

OMG, speaking of circuits, Mrs TBF has my mom's circuit down pat...Printemps, Le Bon Marche...
the scary part? I used to live next to Le Bon Marche. Evil.