Let There Be Light!

I drove Mrs. TBF to the tain station this morning so that she could catch the 7:20 train to Zürich. She'll be away until Friday evening. I guess I could have gone along with her, but she's going to be in meetings all day. Also, I'm sure she'll have dinners with her colleagues and be busy until late in the evening. So, I figured that I might as well stay at home. At least I have King here to keep me company during the hour or so when he's awake during the day. Plus, I have things to keep me busy at home. Such as...
This morning, upon returning home, I noticed that one of the recessed light bulbs in our ceiling had burned out. I noticed that one had burned out on our balcony a few months ago, and now that there were two, it was worth my while to actually think about changing them.
The old bulbs were removed. It was a bit trickier than I expected, requiring a screw driver and a steady hand despite the ever-present fear of electrocution. I have to say that anything involving electricity in Europe scares me a bit. There's a lot more juice going through those wires here than in America, and I'm beset by dark thoughts of Mrs. TBF coming home from work one evening to find me sprawled out on the floor, still glowing, dinner unmade, with a screwdriver in my hand, and a confused look on my face.
As I was saying, I removed the old bulbs and I put one of the bulbs in my pocket so that I'd know which bulb to buy at the store (HA! I rarely make the same mistake twice!). So, to make a long story short (I can feel your collective eyes rolling up into your collective heads.), I bought the bulbs and replaced them (sans electrocution). 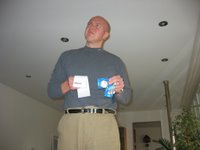 So, what's the problem? I'm glad you asked. My problem is with two numbers: 7.50 and 85. The 7.50 is the price in Swiss francs (about $5.85 U.S.) per bulb at the Gartenstadt Coop. I guess that in itself isn't too bad. What is troubling to me, however, is the fact that we have 85 OF THESE RECESSED LIGHTS IN OUR APARTMENT. That's right....85!!! I'm hoping that we never have a power surge which results in all of the bulbs blowing out at the same time. One big zap and we're out 637.50 CHF (almost $500 U.S.) Here I am standing with the replacement bulbs, the Coop receipt, and a very small portion of the airport landing strip that makes up our ceiling.
Who the hell designed this place anyway?
Posted by The Big Finn at 2/01/2006 10:50:00 AM

I'd say: Start using candles and get yourself a couple of flashlights... Just in case that "big zap" does hit your block!

I swear you have paparazzi following you around to take your pictures!

Are they Halogen bulbs? I just paid $8.00 for a replacment in a desk lamp which only cost me $9!

Delurking to say ... you have EIGHTY-FIVE recessed light fixtures in your apartment? I remain impressed!

Discovered your blog through our comments on mutual other blogs. Cheers!

If you were to place a chicken in the center of your living room and turn the lights on, when would it be done?

Sal...
The chicken would be done immediately. Done in, that is. Our cat would drag the raw bird to a dark corner of the apartment (assuming he could find one) and gobble up that bird - bones and all.
TBF