Do you know where you're Big Finn is?

Much has been written in this blog about my inability to sleep when Mrs. TBF is out of town. This morning has been no exception. 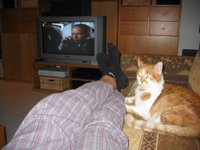 Last night, I was up until 2:00 a.m. or so watching T.V. with King. We watched things like Law & Order. At least it was one of the good old episodes with Michael Moriarty (I guess it was an old episode. I just looked it up, and he was on the show from 1990-1994!). I wasn't feeling tired, and I just figured that it was no big deal because I'd just go ahead and sleep in until the crack of whenever in the morning.
I set the sleep timer on the T.V. in the bedroom, and I fell asleep watching "Viva la Bam!" That show is definitely one of my guilty pleasures. For some reason, I just can't get enough of that gang of juvenile delinquents. I'm not really sure why. Who knows? Maybe it's the decadence, maybe it's his love of Finnish rock bands like H.I.M. - a band, by the way, whose music Mrs. TBF describes as "suicidal". Regardless, I don't really remember too much of the show, so I must have fallen asleep pretty quickly. 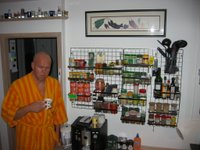 So, when did I wake up this morning? 10:00 a.m.? 11:00 a.m.? NO! I woke up at 6:44 a.m.! As far as I could tell, there were no loud sounds coming from my loud neighbors - Migros and Primus. I just woke up for no apparent reason. I then made the terrible mistake of making the slightest movement which caused King to come over and start tapping me on the nose. I tried ignoring him, I tried telling him to F-Off!, but nothing worked. I figured I'd just go feed him and go back to bed. As I was feeding him, that feeling came over me which told me that trying to go back to sleep would be futile. So, I just turned on the coffee machine, made a cup of coffee...at 7:04 a.m., and let caffeine begin working its mysterious magic.
Maybe I'll go to the gym and shock the early morning gym rats (pretty much the senior citizens...and my ex-neighbor Chris) by showing up before 10:00 a.m.
Posted by The Big Finn at 2/07/2006 01:04:00 AM

I don't think HIM is suicidal. I find them rather interesting. One of their songs that was big last year was positvely Bauhaus-esque.

Eurrggghhhh! I hate it when that happens. Mind you, I have only 2 days out of 7 per week, if I'm lucky, that I can lie in so when it does happen I want to kill someone.

I agree with Mrs TBF about H.I.M by the way.

Orange and I had the same the weekend before last. We have to get up early all week, and then, it's like you can't switch it off anymore. UGH!

I think it's so wonderful that you get to the gym so much. But yes I concur we all have those days. Mine was saturday morning at 6:30am. I guess at times your body knows better? or not...