Fresh off our daytrip to Strasbourg this past Saturday, we decided to set off on yet another, albeit more modest, adventure.
A while back, I noticed that the number ten tramline that passes right by our apartment goes all the way to Rodersdorf. The stop before Rodersdorf is called Leymen, which is actually in France. Having never been to Leymen, I suggested to Mrs. TBF that we take the twenty-two minute tram ride and check out what Leymen has to offer.
We set off on our adventure not realizing that, on Sunday, only two trams per hour actually go on to Leymen. When we arrived in Flüh, we heard an announcement that said it was the final stop. Realizing our error, we discovered that we had about fifteen minutes to kill before the tram would arrive that would whisk us away to our goal - what would hopefully be another exciting visit to France. 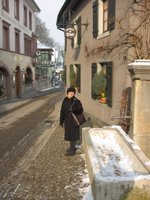 We walked around Flüh for a few minutes and found it to be pretty, well, sleepy. As far as we could tell, waiting for the tram was pretty much the most exciting thing going on in town on Sunday afternoon. However, we did manage to find a restaurant called Säge that we're going to be going to next month with the Expatters. Giddy with the excitement of Flüh, our tram finally arrived, and we slogged onward toward Leymen.
If "sleepy" describes Flüh, then "hibernating" describes Leymen. We walked down the hill toward what appeared to be the main part of town. Eventually we made it to what appeared to be "main street". It wasn't dead. We could see signs of life - smoke coming from chimneys, the flicker of T.V.s through windows, a couple of cars parked in front of a restaurant... The townsfolk obviously had things to do which did not involve being outdoors on a cold Sunday afternoon. It was actually some time before we even saw anybody outside at all. 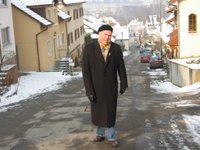 We checked out a couple of restaurant menu boards (they looked good), walked by the main church, and then walked back up the hill to the tram stop. Funny...the hill didn't seem so big when we were walking down it toward town. I'll bet that it REALLY seems big after one has loaded up on cassoulet, pot au feu, or something of that persuasion.
While we were riding the tram back to Binningen, I told Mrs. TBF that I was bored. The strange thing was that I wasn't bored when we left home a couple of hours earlier. Our little excursion had actually made me bored! I think I said something like, "Man...this is one boring country on a Sunday afternoon in the middle of winter if you don't ski!".
Realizing a "TBF low blood sugar emergency" was on hand, Mrs. TBF brought me home, fed me a snack, and then all was well again.
Posted by The Big Finn at 2/01/2006 02:00:00 AM

Leyman is a tad quiet but I can recommend La Couronne D'Or on the main st. They do a 5 or 7 course 'mystery menu' where you tell them what you don't like to eat and then they feed you really well. Good atomsphere on a Saturday night.

True that people are really quiet on cold, wintery Sundays in Switzerland. But I'm glad Mrs. TBF got you back in a good mood. If it makes you feel better, OrangeX gets grumpy under those circumstances, too. All I have to say then is: Snacky?

Gill...
Thanks for the tip. We saw that restaurant and looked at the menu. It looked good, and I think we'll try it at some point in the future. Although...I don't know about the walk up that hill back to the tram after a multi-course dinner. We might have to take a taxi.

Can't wait for our excursion to Sage!

Gretchen-
Us too! Although, we couldn't scout out the menu because they didn't have one posted outside. I'm thinking that it's going to be so good that they don't want to spoil the surprise!