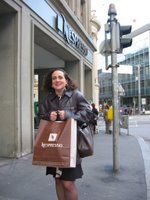 ...and in with the new!
The old Jura coffee machine finally bit the dust this past week. I made the drive to the local dump (a.k.a known as "the tip" to our British friends) and handed it over to the rather ripe-smelling dump employee so that he could put it into the dumpster (a.k.a. "the skip" to our British friends...good grief!) with the rest of the electronic home appliances for recycling. About thirty seconds later, two young men garbage picked my old Jura machine out of the dumpster and promptly stowed it away in their van. HA! SUCKERS!!! I have news for you - the aggravation won't be worth it! But, some things you just have to find out for yourself!
Anyway, after using our French press and little metal espresso maker for a few days, we quickly realized that we were slaves to the automated coffee perfection days of old and decided that we needed to quickly replace the old Jura. Jura had offered us a credit toward the purchase of a new Jura machine, but it was only if we bought one of the three most expensive models. We liked the coffee, but neither Mrs. TBF nor I relished the thought of spending 2,000 CHF ($1,500 U.S.) on a coffee machine. Plus, we kind of had a bad taste in our mouths (so to speak) due to all the mechanical problems we had had with the Jura machine. So, what to do? WHAT TO DO?
I'll tell you what we did. After learning that our neighbors Corey and Suzanne were pleased with their Nespresso machine, we decided to check out the Nespresso store in Basel.
Mrs. TBF and I met outside of the store at lunchtime, checked out the line of machines at the back of the store, sampled some of the coffee, and thirty minutes later we walked out of the store buzzed on caffeine with a new coffee machine, a little gizmo that froths milk, and a bunch of coffee.
SCREW YOU JURA! We're Nespresso people now!
Posted by The Big Finn at 3/31/2006 08:00:00 AM

Well thank goodness that's over! I've been following the Jura drama from the beginning and could see that it was causing you undue stress. :-) Good riddance to bad coffee makers, I say!

We bought a coffee machine quite some time ago and still haven't set it up because the instructions are all in German/French/Italian!! We're very lazy about figuring these things out. One of these days...

We keep looking at coffee makers here but have the old fashioned drip machine. Our problem is worry about where to get refills and great tasting coffee.

Our consensus here: It's easier to find the bins of coffee beans than search for refills as they aren't everywhere.

On the other hand - my family in montreux used Nestle and I got a cup from probably the same machine you've got whenever I wanted. Nespresso is quite good... I love all of the colors and flavors.

Wait, you have stores that ONLY sell coffee machines/supplies.

Totally off topic but you'll enjoy - they're starting reconstruction on the Dan Ryan this weekend, shutting down the express lanes and only having 2 lanes each way open....for the next two years!

Although I love the Nespresso as well, I think you just had a lemon there. We've never had any problems with our Jura. And the thing with costs: The Nespresso refills will definitely cost you (or maybe just us?) more in the end. Nevertheless, I still love both coffee machines.

I heart my bottom of the range Nespresso machine! I wish you many, many cups of delicious coffee from it!