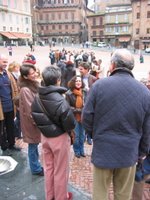 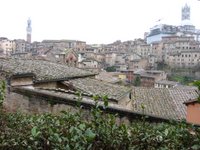 Oh, that's right...one week ago we were in Siena. I guess I should post some pictures while that trip is still semi-fresh in my mind. Mrs. TBF and I took more than 100 pictures in about 48 hours, but I'll limit myself here to just a few.
A bunch of us assembled in Siena's Piazza del Campo for a guided group tour at 11:00 a.m. on Saturday morning. The sky was overcast, and we had some occasional drizzle (both which made picture taking a bit challenging), but the city looked beautiful nonetheless. Siena really is a picturesque medieval city. It was not bombed during the wars, and the buildings are all pretty much intact. The streets are narrow, winding, and hilly which further adds to Siena's appeal. Another thing I like about Siena is that it appears that the government has taken great efforts to ensure that the historic look of the city is preserved. There's nothing I hate more than going to a city and seeing one ultra modern building sitting smack-dab in the middle of a bunch of medieval buildings. 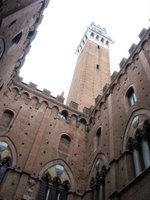 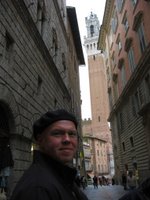 Sights like the Torre del Mangia were pretty cool, but the coolest thing I saw was San Domenico - a Gothic church built between 1226 and 1340. Unfortunately, people are not allowed to take pictures inside San Domenico, which is a shame because inside is a chapel dedicated to St. Catherine which stores her preserved head...and...finger. Now, I've seen some cool things in my life, but...this...was...AWESOME! My face was inches away from this shriveled up little index finger. WOW! Plus, Catherine received many of her visions...and..stigmata (something that fascinates me to no end) in the church. SPOOOOOOOOKY!!! 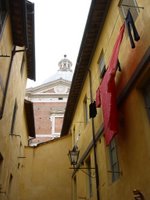 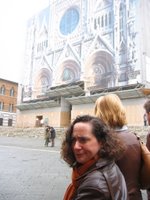 The tour was worth the effort just for the head and finger alone, which was good because my incredibly short attention span caused me to completely lose interest in the tour after this point. Afterall, how could anything else on a tour compete with a preserved head, a severed finger, visions, and stigmata? I began lagging behind the group, gazing into storefront windows, counting the number of flavors of gelato that various gelaterias had on offer, etc. I became consumed with photographing things like laundry hanging outside to dry...in the drizzle, Mrs. TBF's disgust with the scaffolding that shrouded the Duomo, etc. My attention waned, my blood sugar level was dropping, and I began having visions (but, unfortunately no stigmata) of pizza and pasta while we were inside the Duomo. I pretty much proceeded to abandon the group for the Duomo's gift shop. This turned out to be an incredible stroke of good fortune because the gift shop turned out to be a treasure trove of (somewhat kitschy) souvenirs. 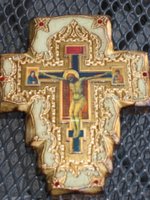 You may or may not be aware of this, but I LIKE KITSCHY SOUVENIRS. I have a shot glass collection that numbers in the HUNDREDS. Seriously, I think I have over 250 shot glasses. I really must count them someday. Also, I have numerous snow globes, refrigerator magnets, AND...my latest collection that I've been assembling over the past couple of years: religious paraphenalia (crosses, crucifixes, etc.) So far, the religious paraphenalia has taken a somewhat serious tone, BUT I mananged to bridge the gap between serious religion and kitsch when I came across this little diddy - my own, personal, beer-belly Jesus! The picture is a little blurry, but Jesus is clearly sporting a rather noticeable spare tire to go along with his stigmata. I'm tellin' ya that it was a steal at 18 Euros - a great addition to the growing collection. 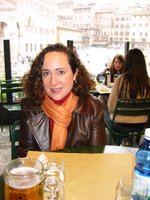 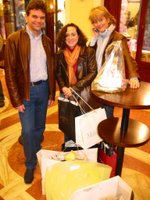 I'm beginning to lose interest in this blog entry, so I'll just nip it in the bud right now by saying that we stopped for a nice pizza lunch at one of the Piazza del Campo restaurants, did a little shopping with Simon and Rosemarie, and then it was back to the hotel for Ronny's big birthday bash.
Posted by The Big Finn at 4/01/2006 04:00:00 AM

I'm speechless! I would have never thought you were the big collector!

Siena looks awesome. I think I'd enjoy that city a lot. As far as loosing interest, I'm so like you that way. I'd do the exact same thing, including the "I need food bit too".. And your collection - I'm thinking that's probably really what the pic of Jesus was supposed to look like.