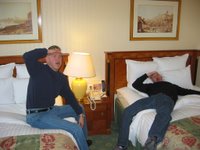 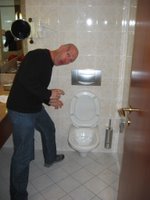 Our EasyJet flight to Prague left Basel (on-time) with me, my ex-next-door neighbor James, and James' co-worker Daniel on board. James and I stayed at the downtown Marriott. Normally, I wouldn't stay at a Marriott. I have nothing against Marriott really, but I'd rather not stay at an American business hotel when I'm in Europe. It's...I don't know...just a bit too American business-ish, if you know what I mean. However, I used some of Mrs. TBF's Marriott Rewards to get a free room, so we stayed in a FREE ROOM at a Marriott.
James and I were relieved that we were able to get a room with two double beds. One time when I went on an International Boyz Nite Out (that's the official spelling, by the way...a.k.a. IBNO), I shared a bed with my friend Paul. At about 3 a.m., I woke up and Paul's legs were draped over mine. Then, at about 5 a.m., I woke up with a strange sensation - like somebody was staring at me. I opened my eyes to find that Paul's face was about two inches from my face. Ahhh...no thanks. Double beds are the standard on IBNOs, thank you very much.
Then, James needed some "relief" in the bathroom before our night out in Prague. Unfortunately, the toilet didn't flush. Fortunately, however, James managed to pry the panel off the wall and did a rather impressive job of repairing the toilet. Relief, indeed!
We...were...ready...to...RUMBLE!!!
Posted by The Big Finn at 4/11/2006 03:55:00 PM

OK, I might've overlooked the fact that you and James look somewhat alike. But...I also notice that you're wearing the same outfits?

Is this part of the IBNO protocol? Or was it intended to confuse the reception personnel so that you'd only pay for a single room?

Sal - It was purely an accident. However, I did end up referring to James as Mini-Me a couple of times during the course of the evening.

Oh! Our toilet upstairs ins't working properly. Maybe I should give James a call then ;-)

Thank goodness you're both Manly Men and can fix the toilet and not have to worry about spooning!

Hey, check out www.monster-pod.com (I can't recall if I sent this to you before or not?)

You guys are a crack up!