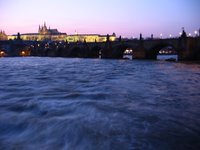 Everything was going well in Prague. We had a few beers under our belts, twilight was setting in, and we were starting to get hungry. We came upon the Charles Bridge with the Prague Castle in the background, and Tomas informed us that we'd be eating at a restaurant just over the bridge. Sorry about the picture - it was getting kind of dark by the time we reached the bridge. If you'd like a better picture, check out the Prague Tourism website. The Charles Bridge is the bridge that's featured prominently in the first Mission Impossible movie, and it was pretty much the only "must see" on my list. So, I was happy that we made had finally made it there. I have to say that the bridge is pretty darned impressive. It's huge, it's old, and it's beautiful. Plus, I knew that dinner was waiting on the other side of the bridge - so I crossed it with an extra bounce in my step. 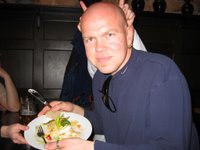 We ended up at a restaurant that Tomas recommended. If I had to go back to this restaurant, I'd be able to find it without a problem. Unfortunately, I can not for the life of me remember what the place was called which is too bad because I would DEFINITELY recommend it to people. The food was excellent and reasonably priced, the ambience was great, the service was outstanding, and I would absolutely go back. I had duck for my main course, but the starter was something I will not soon forget. It had to be the most garlicky thing I've ever eaten in my life. It was some kind of cheese, with peppers, and a garlic oil that will ensure that I have garlic breath for the rest of my life. Here's a picture of me eating it, with devil horns provided by Vanda. 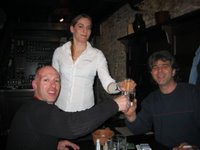 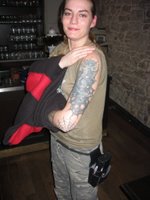 After dinner, we enjoyed shots of the local Czech "fire water" called Slivovice (pronounce SLEE-vo-vitz). If I had to describe it, I'd say that it's basically a plum schnaaps. It went down easily, and then we invited our waitress to have a shot with us. Without hesitation, she poured herself a shot and joined us. While she was downing her shot in one gulp, I noticed a bit of "ink" jutting out from under her shirt. We asked her to show us, and she gladly obliged. We thought we were going to see one or two tattoos. Instead, we were surprised that she was sporting a "sleeve".
We were happy. Our bellies were full, and the night was still young. However, the tone of the evening was about to change.
We were about to enter "the dark side".
Posted by The Big Finn at 4/14/2006 02:20:00 PM

Hey TBF, does the waittress lady in that shot have the name of the restaurant on her shirt? Can you make it out in a higher res version of the pic?

I'm really enjoying your blog by the way! I may end up in Basel next year so I'm looking for ideas and hints on all the swiss expat blogs I can find :)

a thumb ring? another sign that you report back to the US of freakin' A immediately!

Anonymous-Good call!! It looks like U Glaubisu when I blow it up. Although I can't find anything about it on the internet. Thanks for stopping by.

TMS-The ring is the only remaining memory I have of my dear grandfather. He gave it to me on his deathbed. Unfortunately, his fingers were much larger than mine and the ring will only fit on my thumb.
Regarding "reporting" back to the U.S.A....I'll be in Chicago on Tuesday. As a matter of fact, I go back to Chicago at least twice per year. You, on the other hand, have never come to visit us in the 5.5 years we've lived in Basel. But...I'm sure you have another good excuse for not coming again this year.

(formerly Anonymous)Glad I could help TBF :) I'm going to use your blog as a trip planner in the future since it has such good information! I also started my own blog and put a link to yours as one of my inspirations, we'll see how it develops. http://beejum.blogspot.com/ if you're interested, though there isn't much there yet :)

ok now i feel bad about the ring.

So did Mrs TBF still let you in after all that garlic?

TBF I love the shot of the Charles Bridge. It's different and unique and just beautiful at that time of day/night.