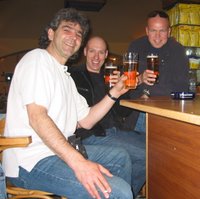 While James and I were dropping off our bags in our room (and repairing the toilet) in our free room at the Marriott, Daniel was enjoying a beer in the Marriott bar. Daniel decided to stay at a smaller bed-and-breakfast style hotel about a ten minute walk from our big, American business style hotel. When we finally made it down to the Marriott bar, Daniel was just finishing his beer. He paid for his beer, and we headed off through the streets of Prague toward his hotel.
After arriving at Daniel's hotel, James and I decided to check out a local Czech hole-in-the-wall bar that was located about twenty meters away from the hotel entrance while Daniel was dropping off his bag. The bar ended up pretty cool. There weren't too many people in there, the bartender and his assistant didn't speak too much English, and the beer went down easily. Daniel showed up a few minutes later, and the three of us enjoyed a couple more beers.
We stuck around for a while, and we ended up enjoying eight beers between the three of us.

Did any of them speak German? Because that is their second language, not English...

Ahhh Expat - Swiss dollar?? Did I miss something on the local news? ;-)

ET-The older people pretty much speak Czech, Russian, and Polish. Starting about ten years ago, the schools really started pushing English. I think most people speak some German due to the proximity of Austria and Germany. English was widely spoken.

CS - you didn't miss anything... just my lack of a good memory these days..
I had spent May 2002 in Prague. Experienced a lot including tons of people asking me if I spoke German rather than English. . Of course I was there teaching English so what you said TBF is definitely true... I just never knew how important hand signals were when you don't speak any common language...

I still need to find all of my photos from that trip!