Prague: Final Chapter - The Dark Side... 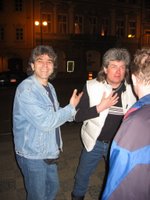 Ok...so we didn't really venture that much into the "dark side" of Prague. But, we did have our moments.
First of all, after enjoying our dinner, we ventured back onto the Charles Bridge where I noticed that Daniel had a Czech "hair twin". Actually, Daniel doesn't have a mullet like this guy does, but they both had thick salt-and-pepper hair. I asked Tomas to ask the guy in Czech if I could take a picture of the two of them together, and he agreed. No problem. 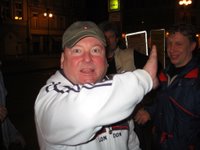 No problem, that was, until the guy's friend suddenly appeared out of nowhere - ranting and raving. The guy actually looked like he was going to take a swing at me. Fortunately, this took place at the exact moment I was snapping a photo. Sure, fisticuffs were imminent, but sometimes you have to take risks for "photographic gold".
The guy, who kind of reminded me of Kyle Gass from Tenacious D, apparently thought that we were making fun of him (which we weren't). The guy's buddy and Tomas both tried to talk sense into the blob, but he just wanted nothing to do with it. At one point I told Tomas to tell the guy in Czech if he didn't back off, that I was "...going to stick a size 12 American shoe up his ass." Tomas wisely decided not to act at translator at this point, and we ended up going our separate ways - bloodshed avoided! 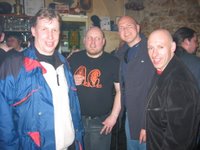 A little while later, when we were well into our Prague pub crawl, James and I found a guy who we decided was our long-lost-separated-at-birth Czech brother. We asked if we could take a picture with him, he agreed, and Daniel took the picture...while Tomas kept a lookout for any potentially insane friends lurking in the shadows. The photo was snapped without incident, and we continued on our way.
At one point, Daniel ended up going back to the hotel, but James, Tomas, and I forged ahead. Around 3:00 a.m. or so, the "munchies" set in. For the life of us, we just couldn't find a place with an open kitchen. Finally, at one bar, some random guy heard that we were looking for food and offered to get us a couple of pizzas. Although we were a bit hesitant, he convinced us that we would have two hot pizzas in front of us in ten minutes. True to his word, two pizzas (plus a gyro sandwhich) were sitting in front of us in about ten minutes, we paid him, and dug in.
We inhaled our food, were solicited by a prostitute (who, by the way, spoke perfect English), had a couple more beers, and then finally decided it was time to wind our way through the empty streets of Prague, back to our hotel - it was 5:30 a.m.
We slept for about five hours, got ourselves ready to leave, and then took a taxi back to the airport where we once again met up with Daniel.
Just for the record:

The taxi sitting in front of the Marriott to the airport = 900 Czech Crown!!!!

I love the picture of the triplets! Does that mean James and you have the adopted the guy full time now?? The resemblance is amazing. Sounds you guys had a lot of fun. Next time organize the shuttle both ways and spend the Czech crowns on more beer and pizzas ;-)

I just hope this Kyle guy is not related to me. At least, I don't see any resemblance.

Oops. forgot to change my identity. :-)

I love that picture of the guy trying to take a swing at you! Great action shot. Imagine how pissed he would be if he knew his picture was on the internet now.

I'm very good at restraining myself and getting out of dicey situations, but I'd sure have had a hard time walking away from someone threatening me for taking a picture. Good job!