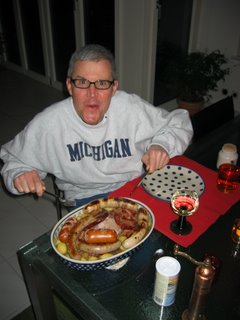 ...eats some faux French food!
This is our neighbor Corey enjoying some Choucroute Alsacienne (Alsatian Sauerkraut) last night at Chez TBF. Our wives were both at a meeting in Luzern, so we decided to throw caution to the wind and plow into some of France's finest country cookin'.
It's a well known fact that Mrs. TBF and I love all things French (except for their ridiculous denial of Globalization's existence). However, did you know that Corey and Suzanne love all things Italian? That's right! Italian wine, Italian music, Italian vacations, and even Corey's Italian-looking glasses. When he's talking about Italy and Italian people with Mrs. TBF (an Italian-American), he even refers to it/them as "our people" (NOTE: Corey is German-American!)
So, it was with a bit of trepidation that I decided to go French. However, since Mrs. TBF is the Italian cooking expert, I figured that my attempt at Italian cuisine would pale by comparison. So, I got out the big, yellow Le Creuset pot and created a rather superb (even if I do say so myself) Choucroute. Corey (who King refers to as "Bones") told me that he had to fight the urge not to over-indulge. I guess I didn't over-indulge either - we did manage to leave some leftovers.
All the food was washed down nicely with a little Alsatian wine and beer, and we bid adieu at around 10:30, or so.
Afterall, it was a "school night"...for Corey.
Posted by The Big Finn at 4/06/2006 04:05:00 PM

I love that meal! I miss it here. I just don't think it would go over with everyone here. The easiest way to make that is buying it already made from Geant. So easy, 12 mins in the micro and poof... Of course you can make it on a burner/grill for way better taste. But what do I know, you were the one cooking it!

Looks very delicious! There is a very similar dish in Bavaria (but I can't recall at the moment what it's called).

That looks great, TBF! I've never made it myself. I wonder if Orange likes sauerkraut...

ET-I have also had the convenient Géant version. It's actually pretty good!

Karen-I think I had something similar to this dish when Mrs. TBF and I met a friend from Chicago in Munich. Our friend found it amazing how few vegetables were served in Munich. At one point, I recall him saying to a waiter something like: "...can't I get a carrot or something?" Sauerkraut and potatoes were pretty much the only "vegetables" we at that weekend.

CS-I think Orange would like it. The key is to first rinsing the sauerkraut to get rid of the strong vinegar flavor.

You Dog! How can you do this to me when I'm about to eat a miserable turkey sandwich for lunch?!

May your Swiss cheese be cursed with holes!

When I read earlier this week that you were planning this dinner I was thinking of inviting myself over considering I was also spouse-free last night. But then I figured it would throw off the whole karma of it being a guys night...

I do love the kraut!

Wow, those were some big sausages!

When I was a kid we used to make our own sauerkraut, YUM!

I can't stand sauerkraut, but I'm a big fan of the 1664...I never knew until I came to Basel that the French also made good beer.

Oh yum! We love our sauerkraut around here. And it so good for you...if you leave out the sausages, that is. :-)