April Macht Was Er Will! 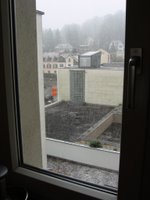 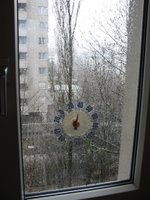 Carmen, who was my German teacher, used to say that all the time. Well...I guess she only said it a couple of times (it would sound kind of dumb saying it in...oh...October...for no reason whatsoever), but...I remembered it. Mann sagt dieser Satz auf Englisch (one says this sentence in English...sorry about the spelling): April does what it wants. And, here's the evidence with two views out of our kitchen windows. The one view is toward the Bruderholz hill with the "beautiful" Migros roof top in the foreground, and the other view is toward the tall apartment building across the river from us where the people like to stare at us for hours when we're up relaxing in our roof top garden during the summer (...if it ever comes!). Yesterday I was planting herbs in the garden without a jacket, and today I'll be putting the winter coat back on.
You know, that little blurb I just wrote in German brings up an interesting point. I have no idea if Mann is spelled with two ns or if it's supposed to be dieser, dieses, or diese, but I'm throwing some of my broken German onto the blog for the world to see. Besides, every German speaker who reads that sentence will know what I'm talking about - and that's what it's all about. You see, I used to tell my German teacher all the time that I didn't give rip about spelling every word correctly or conjugating all the verbs properly. Most of the time, I don't know the gender of the noun. Carmen would occasionally try to ram grammar down my throat, but I'd fight it. I'd tell her that I didn't need German for a job (...thanks Mrs. TBF!), but that I only wanted to learn to speak it well enough that German speakers would understand me. So, most of the time her method of teaching me was just verbal (ok...with a little grammer mixed in so that she'd feel she was earning her keep). And, you know what? I began to notice in conversation classes that I was doing most of the talking, and that my German was usually better than most of my other classmates' German. Yup...I was crackin' jokes, pulling German words outta' my ass that I didn't know were in there, and just chirping away like a kleine vogeli. One day, I suddenly realized that the reason for this was because I had gotten over the fear of making mistakes, and I'd just blurt out whatever sounded good - kind of like a kid would do. And if there's one thing that I pride myself on is the fact that I still consider myself a big kid! Sometimes, thankfully, I'd be corrected by the Carmen or the conversation class teachers - like the time I mixed up the words scheibe and scheide (one means slice - as in a slice of cheese - the other means vagina...DOH!). Thankfully, that one happened in my private lesson. But, most of the time, my teachers would just let me ramble on and on. And, while the other people in the conversation class were taking notes, looking up words in the dictionary, and looking at conjugation tables, I was actually learning to speak German. Hmmm...imagine that.

Did you and Ms Mac have the same German teacher?? She just commented with the exact same quote (April macht was er will) on my post about the crazy Basel weather!

yeah I guess everyone in Basel and Zurich is going through it...

LOL! From now on every time I eat a slice of cheese I'm going to think about that and laugh. Thanks A LOT! :-)

and...it's "diesen" because "der Satz" is an accusative object. Like anyone really cares, right?