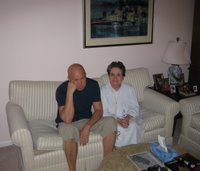 My first day in Chicago is always spent in a haze of jet lag. Inevitably, I wake up very early on the first day after my arrival. This trip was no different from the rest. I woke up at 5:05 a.m., and then I had some coffee with Jo the mother-in-law while watching the news and weather forecast. This picture was taken at 5:35 a.m. Wow!!! No human being should be awake at that hour. Jo does it all the time...double WOW!!!
After picking up my rental car, I drove over to my sister's house. I have to tell you that the rush hour traffic in Chicagoland SUCKS!!! The drive from Jo's house to my sister's house is four miles (about 6 kilometers), and it took...35 minutes!!! CAN YOU BELIEVE IT???? I ended up finding a shortcut through my old neighborhood a couple of days later and cut it down to 25 minutes. But still...major league aggravation. 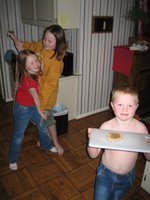 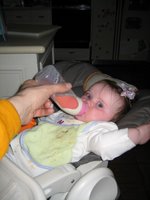 As I said in my previous post, the energy of my nieces and nephew overwhelmed me. This is how they looked about twenty minutes before they had to leave for school. Just when I thought that complete anarchy was taking over the house, my sister handed me a bottle, asked me to feed the baby, and then used "the voice" that only mother's possess in order to get the kids to resign themselves to their fate. Ten minutes later, my sister and her kids were in the minivan pulling out of the driveway.
I still say, I don't know how she does it.
Posted by The Big Finn at 4/29/2006 01:30:00 PM

my mom has that voice. i hadn't heard it in about fifteen years until she was dogsitting this chick's dogs, and wanted them to go inside...when she started talking, i jumped quicker than the dogs.