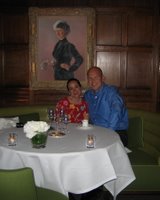 We thought we'd make things easy on ourselves the first night in London by eating dinner at our hotel. First we had a cocktail in the bar, and then we mosied on over to the restaurant for our 9 p.m. dinner reservation. At first, I was a bit alarmed because the restaurant was about 80% empty. Was this a mistake? Does the food suck? NO! It ended up being really great. I guess most people just dined earlier, were busy watching the World Cup, or whatever...
We had a really good and relaxing dinner (after I got over the feeling that we were being watched). The service was great, friendly, and unhurried. Ahhhh...the restaurant dinner that takes place over hours - that's one thing to which I've become accustomed while living in Europe. I'll have a hard time readjusting to the "turning tables"/rushed restaurant service when (and if) we ever move back to North America. 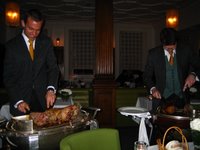 For the main course, I ordered lamb, and Mrs. TBF ordered roast duck. There we were, digesting our starters and sipping a little wine, when two big carts appeared in front of our table. A few seconds later, two very friendly waiters began carving away.
I seem to recall that neither one of them had a British accent. I began to listen around the room, and I noticed that pretty much the entire waitstaff was non-British. The sommelier was Spanish, I heard one waiter speaking French, etc., etc. It kind of ended up being a constant theme throughout the weekend - many of the people in the service industry were foreign. As a matter of fact, the only service employees that seemed to always be British were the London taxi drivers. And, one of the taxi drivers had such a heavy Cockney accent that he ended up being the only person during the weekend whom we had trouble understanding. I kind of wish the English "hag" from my German conversation class who always feels the need to bring up how she feels Americans have "...destroyed the English language" had been in the taxi with us so that she could have translated this "perfect" English for us low-class North Americans. Then, I would have asked the taxi driver to stop, opened the door, and booted her snobby ass out the door into the gutter. There...I feel much better now. Thanks! 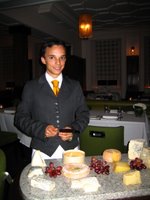 Anyway, I tried to convince the guy carving my lamb to just stick the whole leg on my plate, but he wasn't falling for that old line. As it turned out, the portion size was just right as it left room in "me belly" for a little cheese course. It's at times like these that I realize that my life is very, VERY good! I actually caught myself saying to the waiter (who was, by the way, one of the smallest men I've ever seen) something like "...I eat French cheese all the time. May I please have all English cheeses for a change of pace?". Good lord!
So, gettin' back to the cheese waiter... I'm telling you, this guy was smaller than Mrs. TBF (and she's only five feet tall). I referred to him as the Italian Cheese Jockey (not to his face, of course), because he was from Italy, he was serving me cheese, and he was tiny like a jockey (get it?). I mean, I think the cheese on my plate weighed more than he did. I told Mrs. TBF that I could have eaten him for my main course and still had room for some cheese or dessert. And, I have openly admitted to Mrs. TBF and others that if it was legal to eat roasted human flesh, and offered on a restaurant menu somewhere, that I'd be gnawing away at a human bicep or calf - tenets of society be damned! But hey, I'll get into that some other time.
Get in me belly...now!
Posted by The Big Finn at 6/20/2006 05:15:00 AM

Boy that cheese looks great!!!! Now I want to go to London just for that alone. - Perry

Yes you must admit sans kids you guys have the life of lives you are living. I'd love to be in your place and travel so much and be the servant of the house, or working...

I'm just thankful we will be going on a wk tour of BC in July because we didn't even think we would be going on vacation since I need to stay in canada for now...

I was wondering if you'd end up getting the whole leg of lamb. That stilton in the back looks lovely!

Sounds like you and my hubby would get along just fine, he says that too! BBQ is just about his most favorite thing in the world.