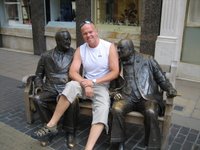 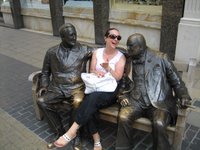 We went for a walk on Sunday morning after our "propah" English breakfast. Mrs. TBF had spotted a packet of index cards called City Walks: London while we were in the Tate Modern museum gift shop, and decided to buy it. I just noticed that there's one for Paris - I guess we'll have to get that one too! We went through the pack of cards (billed as "50 Adventures On Foot") and decided on the Mayfair "adventure" because it was, well, pretty much the closest one to our hotel. Give me a break...me belly was stuffed with black puddin'!
While on our little excursion, we came across a couple of familiar characters. I didn't really think much of it when we took the pictures, but now that I'm looking at them, I think they're pretty funny.
First of all, are these life-sized statues of FDR and Churchill? If so, either they were really small men, OR I'm still pretty darned big. I especially like the fact that Churchill seems to be smelling my pit, and FDR is having a good chuckle over the whole bloody thing.
In the second picture, FDR is obviously completely engrossed in everything Mrs. TBF is saying, AND Churchill is "caught in the act" of taking a little peek down Mrs. TBF's top (...the old perv!).
Adventure, indeed!
Posted by The Big Finn at 6/22/2006 12:50:00 PM

It really looks like Churchill is smelling your armpit! LOL

Oh my goodness, you ARE a giant!

I love the pics. We've taken a few over in Queen Elizabeth PArk in Vancouver and it's so funny. I crack up with the things people come up with and yours are definitely funny too!

By the way, you look very European!

The past few posts have totally flipping cracked me up. it must be my meds.

Terve!! Osaatko suomea???.... I too am a Canadian Finn....but born in the old country...still speak the lingo...lived in Lahti after retirement in 2001....My hometown in Canada is Thunder Bay....been through Sudbury too many times to count....
Matti Rikkinen, Ottawa, ON

TMS-Thanks. You can buy yourself a pair at The Gap. You won't even need to part with your (as George Carlin calls them) fat-ass Dockers.