I can't head into eight weeks of doing pretty much nuttin' without recapping last weekend's trip to Liverpool. Liverpool has been designated the European Capital of Culture for 2008. I'm glad they have two more years to prepare - theyd better pick up the pace a bit because they really have their work cut out for themselves.
Don't get me wrong. I liked Liverpool. We had a really nice time. But (and it's a BIG but), I think the city could do so much more with their Albert Dock area. Also, I think they could play up the Beatles-thing, the pubs, the restaurants, etc. much better than they do.
Albert Dock is pretty much THE focal point of Liverpool, and it kind of...well...sucks! I guess I was expecting it to be kind of like Navy Pier in Chicago - I was wrong. Albert Dock was kind of dead, and there were a lot of empty storefronts. I thought it would be buzzing with activity - a place to spend several hours. Instead, it seemed to me that it was just a place to walk around once, take a few pictures, and then move on. It shouldn't be like that. 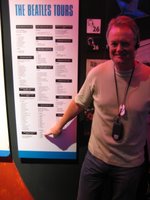 The Beatles Story, featured at Albert Dock, was kind of a letdown. It wasn't bad, but it definitely wasn't as good as it could have been - or should have been. I found my A.D.D. kicking in after about twenty minutes. There's a lot of "filler" at that museum. It's almost as if they have a lot of junk set up taking space while they wait for people to donate things that are actually worthwhile seeing. A highlight for me was my friend John pointing out the date he saw the Beatles live, in concert in Nottingham (November 5, 1964). Um...by the way John, I was two years old when you saw the Beatles live. 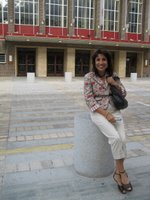 A whole group of us flew together to Liverpool on easyJet. Unfortunately, Mrs. TBF wasn't feeling too well, so she spent a lot of the time in bed sleeping off what we think was a touch of the flu. However, we did go out and have a couple of really nice dinners together as a group. I found the food at the restaurants to be good, and the people of Liverpool to be pretty friendly. We stayed at a hotel called the Hope Street Hotel, and it was a very nice, boutique hotel (although whoever caulked their showers must have been blind!). I would definitely stay there again if we ever returned - which I don't think is very likely. Afterall, our friend Rammy went to the University of Liverpool, and this was her first time back in twenty years. Here she is in front of where she had her graduation ceremony...lo those many years ago. 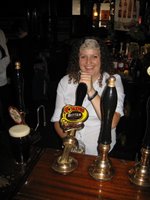 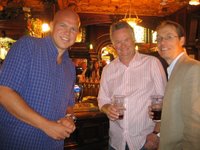 And, of course, no trip to Liverpool would be complete without at least sampling Liverpool's local brew - Cains Bitter. We can buy it here in Basel, but it comes in a one-liter can. In Liverpool, one can experience the real deal pumped up from a cellar cask. Kids under eighteen aren't allowed in pubs in Liverpool, so John, Andy, and I pawned off the kids on the ladies so that we could enjoy a pint of Cains at a really great pub that was right by our hotel (sorry...I can't remember the name). After dinner, we returned to the same pub for a cigar and a couple more pints. That pub was everything I think a pub should be: dark wood, stained glass, and smoke so thick that one can barely see the ceiling. It was great.

One more thing...stay with me here! 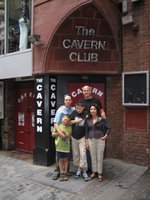 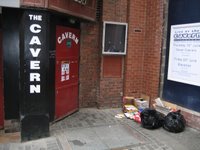 On Sunday morning, we (sans Mrs. TBF who stayed in bed...) decided to walk to where it all pretty much began for the Beatles - the Cavern Club. We found it, posed for a picture, and then (about thirty seconds later) a man came out and threw his garbage and recycling right next to where we had just posed for the picture. I guess timing is everything!
Shortly after these last pictures were taken, we were whisked off in taxis down "The Long And Winding Road" to John Lennon Airport, and checked in with our "Ticket(s) to Ride" easyJet back to Basel. I'm not sure if we'll ever "Get Back" to Liverpool, but I'm sure we'll all "Come Together" in another city soon. I'm not sure where or when, but I'm sure "We Can Work It Out"!
"The End"!
Posted by The Big Finn at 6/27/2006 08:10:00 AM

funny incedent at the end... The dummy in the window looks real. Good to know about liverpool though!

Dearest TBF - You forgot to mention our "PB" pre-boarding on EasyJet that we obtained just because we were travelling with Sammy! Way to go Sammy - maybe we'll just take you along on our next EasyJet flight!

Get a job. If you note a tinge of jealousy, it is there.

Big Finn,
did you get a chance to check out the rest of the city centre Georges Hall, or the town hall, or the cathedrals, or the Philharmonic (the pub not the concert hall, Williamsons Tunnels.

aigburth17 - Thanks. Philharmonic was the name of the pub we went to by our hotel. Cathedrals - yes (walk by), city centre - yes, Williamsons Tunnels and Georges Hall - no.