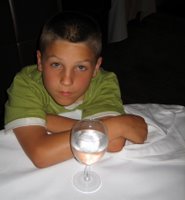 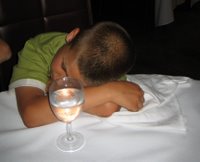 That's my nickname for Sam, and these are two pictures that I took of Sam (Andy and Di's son) toward the end of dinner at our hotel this past Saturday night in Liverpool. I suspected he was really beginning to fade when I took the first picture. And, I was right - I took the second picture about twenty seconds later. His sister, Alie, was supposed to come along on the trip too. Unfortunately, Di had to cancel at the last minute because of a pressing work deadline, and Alie decided to stay at home and keep her mom company.
Sam, Alie, and Oliver (John & Rammy's son) are all good kids. They're well-mannered, converse well with adults, and (for the most part) are enjoyable kids to have around. Sure, I need to threaten them with a "...don't make me have to come over there and thump ya!" every now and then, but...kids will be kids.
Let me tell you something - these kids live THE LIFE! Andy and I always blurt out "THEY'RE LIVIN' THE DREAM!" everytime we're out for dinner and the kids order something like foie gras or a mille-feuille. I've actually witnessed one of the kids taking a sip of wine from their parent's glass and then commenting with a "...hmmm...oak". My God...the only "oak" I tasted as a kid was when oak splinters flew into my mouth while I was chopping it!
Now, Andy and I both had pretty darned good childhoods, but we do try to point out to the kids (every chance we get) how "cushy" they have it. I say things to Olli like: "You know, when I was fourteen - one year older than you are right now - I had a summer job working in a factory nine hours per day!" He cares not. Andy and I will point out to Sam and Alie that "...when we were kids, going out to eat was only for special occasions like birthdays, and it was something you did only a few times per year." Their response: "Were you poor?" We try to explain that we weren't poor, but it's just that times have changed... By this point, they're questioning the waiter whether or not an amuse-bouche will be served, so...why beat our heads against the wall? So, getting back to Sam...
As I pointed out before, we flew easyJet to Liverpool this past weekend. For those of you who don't know, easyJet does not pre-assign seats. Check-in opens two hours before the flight. If you check in early, you'll be assigned an "A" boarding card. If you check in at the last minute, you'll be given a "D" boarding card. When it comes time to board the plane, the boarding is in order by groups - A, B, C, D. So, Sam and Andy were just ahead of us in line (By the way, Andy got the "...do you have any sharp objects, etc. in your carry-on..." blah...blah...blah, to which he answered "no", and then Sam blurted out: "How does she know if you're telling the truth or not?"...the kid kills me!). After checking in, Andy turned around and lorded over us that he got "pre-boarding" so he could board first because he was traveling with a kid. I was immediately incredibly envious and took out my frustration on the loitering Sammy as I walked up to the counter by telling him to "amscray" so that I could check in. This ended up being a stroke of luck, because the check-in lady asked me, "Are you with them?" "Um...yes," I responded, and we ended up receiving "pre-boarding" even though the "Saminator" isn't our kid.
Way to go Samalamadingdongdillyofadinger! Maybe we'll rent you the next time we're flying somewhere on easyJet!
Posted by The Big Finn at 6/28/2006 12:30:00 PM

Hey...sometimes it is good to have a kid around!

It is always better with a kid around. Never travel without one!