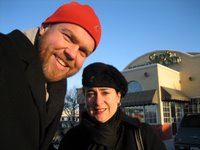 The fact that I've been stuffing my face full of food 24/7 while in Chicago pretty much explains why I haven't blogged at all for the past few days. There were the ribs at my sister's house on Thursday night, the "cheesy beef" and onion rings for Friday lunch, the prime rib on Friday night, the corned beef hash skillet for breakfast at 8:00 a.m. on Saturday morning (it's amazing how quickly things turn "redneck" once one is 60 minutes outside of Chicago), and sushi for dinner on Saturday night. 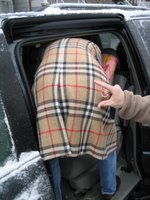 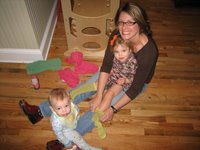 Yesterday, we went into "the city" to have breakfast with Dave (I only managed to get a picture of his hand), Shannon, and the girls. We ate at a restaurant called Wishbone that promotes itself as a "haven to young families". My omelette was pretty tasty, and... 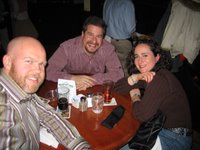 A couple of hours later, Mrs. TBF and I made the short drive to Andersonville where we had lunch with Michael. Even though I was still somewhat full from breakfast I still somehow managed to wolf down a hamburger and fries. 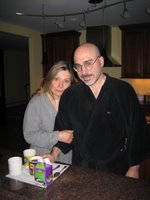 After that, we drove to the 'burbs to watch the Bears' game on Colon Blow and Mrs. CB's HD TV. Of course I crammed in a few brats, some beers, and a bunch of snack food down the old gullet...even though I wasn't really even hungry.

There is a diet plan out there that says eat a good healthy diet and exercise 6 days out of the week. Then allow yourself to eat anything you want on that 7th day.

The theory is that you won't feel deprived and how much damage could you possibly do in one day?

I would recommend you avoid that diet. You can do an amazing amount of damage in less than 24 hours!

I wonder why your stomach isn't feeling at its best. Hmm... Perhaps the snack food after the brats was too much?

TBF: next time you'll let me know in advance when you're leaving for Chicago. I don't know the family yet but I love the menu! Each and every day so far!!

Sounds like every trip I have ever taken back home to Wisconsin! Gotta love that fine midwestern cuisine...Enjoy!