Nothing Matters But The Weekend...

...from a Tuesday point of view.

Here are a few reasons why this past weekend was a great weekend: 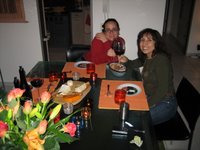 Rammy invited herself over for Friday night dinner because John was out of town on business and Olli was at ski camp.

Why spend Friday night at home alone when it's so much more fun to spend it with good friends?

I made some of my "famous" osso buco and served it up with my butter and cheese laden polenta. There was also a little more cheese, some dessert, and plenty of vino Italiano.

A great start to the weekend. 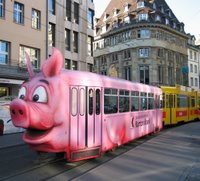 Saturday was a beautiful, unseasonably warm (...remember when it was called that instead of global warming?) day. We went into town to do a little shopping where I even managed to capture the piggy bank tram car on film. "The Pig" is very elusive. 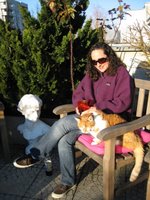 We decided, upon returning home, that King was in need of a little fresh, unseasonably warm, January air, so we brought him up to 'The Fishbowl" where he proceeded to be blinded by all that sunshine, ate some still-surviving-due-to-unseasonably-warm-temperatures grass, and just foraged around for God knows what. Just think, it won't be long until we're having "Impromptu Fishbowl Fridays" again. 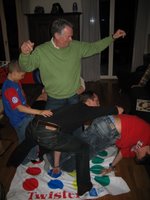 On Saturday night, a bunch of us folks showed up at Alan and Wendy's house for dinner and "games". Some of us, including a not-too-jet-lagged John, played Twister (this was the only picture which didn't reveal assorted bald-spots and butt-cracks). I opted for Kerplunk (When's the last time you played that?) and foosball.

We had a nice prime rib roast, plenty of good wine, and an all-around good time into the early-morning hours. Plus, as an added bonus, we even managed to go the entire evening without the overly-strict upstairs neighbors calling the Polizei. 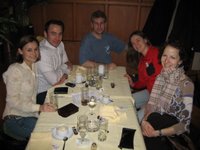 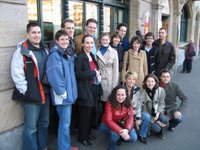 As if more proof is needed that the internet is an amazing thing, a bunch of us bloggers got together for a tête-à-tête in Basel. Just think, the only people out of the 25 who were in attendence that I knew one year ago were the Expatters, Canadian-Swiss, Orange-X, and Mrs. TBF.

I became so involved in trying to talk with everyone that I somehow managed to forget to take pictures. So, I only ended up getting shots of about three-quarters of us. I guess there's always "next time" since plans are already in the works for the next blogger get-together.

A group of strangers brought together by the common thread of blogging. Ahhhh...we are the world!

Q: What do the Green Bay Packers, TBF, and Mrs. TBF all have in common?

A: We all spent a part of our Sundays sitting at home watching the mighty Chicago Bears advance to the NFC Championship game.

It was the perfect end to a great weekend.

You know what? We do suck...especially me!

Hmmmm.... any chance of you sharing your osso bucco recipe?

Your Friday eve just gave me a hint of what to cook sometime this week.
Fishbowl: Does that mean we can expect a phone call, soon?
Sat eve: I would have imagined Twister to be more your game. You know, with your long limbs?!
Blogger's meeting: I think most of us forgot to take pictures... Proof enough that we all had a great time :)

True, the Packers may suck, but I still love Brett Favre! Glad to see he's reading your blog.

Thanks for organizing on Sunday. Sorry we couldn't stay longer, but the baby is the boss.

Ms. Mac - I'll be happy to do it. People have asked me for it in the past, and it'll be much easier for me to just post the recipe on the blog and send people a link. I'm leaving for Chicago in a couple of days, so REMIND ME if you don't see it by February 1st.

CS - There are many trips coming up, so I don't suspect there'll be an I.F. until at least the middle of next month. However, you never know...
Twister is too hard on my "glass" knees.

Gretchen - The Packers DO suck, but they actually beat the Bears in their last game this season.

Thanks to all for coming. Thanks to Julie and Sara for coming up with the idea of us all getting together, and thanks to Canadian-Swiss for making the arrangements with Zum Braunen Mutz.

Sounds like you had a great weekend. came to visit me and we were going to have a toast to you when we got up on Sunday morning, but unfortunately we didn't get out of bed until almost 10:30 am, you all were home and probably on your way to bed! Maybe I'll make the next one!

Wow, 25 people is an awesome turnout. I bet you guys had fun.

And yes, please do post the osso bucco recipe. My mother used to make it but I haven't clue how it's done.

yes that receipe looks great! Love the title of this... Weekends are wonderful but go too fast. Looks like it was a good one!

From a Tuesday point of view.

Like a kettle in the kitchen, I feel the steam begin to brew.

Let me know the next time you all plan to meet up, I would love to meet some other Basel based bloggers!!

Sounds like you guys had a lot of fun.