There was a quick shake, a little bit of rattling, and...that was about it. No damage, but I'm beginning to think that I should maybe do something to secure my massive shot glass collection that sits precariously on the moulding ledge in the kitchen.

The thought of wearing shoes that other people have worn...DISGUSTS ME! 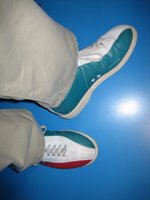 However, being the good sport I am, I laced up my turquoise, white, and red size 47s, and actually managed score a rather decent (at least for me) 124 in my first game (are they called games in bowling?). If I remember correctly, I even had the high score in the first game. 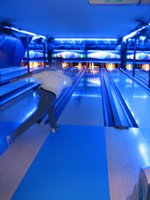 During the second game, my "glass" knees began to bother me (bowling really seems to be hard on my knees) and my score plummeted to a 91. Mrs. TBF actually improved from a 50-something in the first game by rolling something like a 110 in the second game, but we were all put to shame by Alan and Wendy (husband and wife) who each rolled an identical 145 in the second game.

The pins seemed slightly smaller than the ones in America, and they were reset and cleared by strange cables that were attached to each pin. But, overall, everything else pretty much felt the same as late-1990s bowling in the Chicago suburbs.

I have to admit that bowling probably has difficulty cracking my "Top-100 Favorite Things to Do" list, but I ended up having a pretty good time. In fact, it's possible that I'd be willing to not wait ten years before returning to the lanes...

I didn't feel a thing, although I must aadmit that were just about arriving in Basel by train from Zurich airport.

You definitely bowl better than me but then I'm always fretting over potentially tearing off my thumbnail in the ball.

Earthquakes???? Now I am too scared to come to Basel!!!

It's comforting to know that they make bowling shoes in size 47. Our 13 yr old is there already so we may have to start binding his feet to assure life-long bowling fun.

Dixie - I worry about one of my fingers (or my thumb) getting stuck in the ball.

CB - Just think of it as much needed excitement for Basel.

Christina - I think they also had size 48 shoes.

Have you ever tried the other versions of this game? I know there is a swiss one which I totally like more because you have to go up to 100 and then back down via teams. P and I played last August and loved it. Try that one, it's way more fun!

We have 6 pin smaller bowling balls here and it's so odd!