Let's Do Lunch -
The day after C.A.V.E., we met up with the Expatters for lunch sans alcohol (at least for us) and peanut butter/chocolate fondue (that was the killer) at Restaurant Zur Harmonie. We hadn't seen the Expatters since August, and thought it was about time to put that streak to an end. I didn't bring my camera, or maybe I did...can't remember, but you can see a picture of us looking surprisingly none the worse for wear right here. 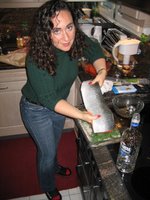 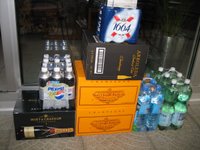 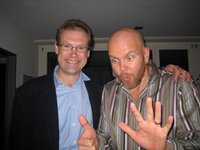 N.Y.E.E. -
Having had a full forty hours or so to recover after C.A.V.E., we once again put our stomachs and livers to the test at our New Year's Eve's Eve party. Mrs. TBF made WAY too many appetizers, including homemade gravlax or graavilohi as we Finns call it, which we put outside on the balcony before the party along with the refreshments in "nature's refrigerator". We had about twenty guests who barely put a dent in the food, but managed to polish off a healthy chunk of the bubbly. I even came up with a New Year's resolution during the party...

Henry mentioned that we need to plan more get-togethers with each other, so I resolved to call him, rather arbitrarily, at least six times during 2007. I'm not sure where the number six came from, but...there you have it!

New Year's Eve -
We arrived at John and Rammy's house (armed with leftovers from N.Y.E.E.) all refreshed after an afternoon nap (...another one of my 2007 resolutions: take naps). We actually brought the camera along, but it turns out that we didn't even take one picture. Our friend Alan took a bunch of pictures and sent them to me in pdf format, but I can't figure out how to import them into the blog. I'll add some later if I can figure out how to do it.

Needless to say, the party at John and Rammy's (as usual) was a lot of fun. It was the typical fun crowd of people all enjoying the Thai food that Rammy made. We sat around the dinner table talking about our resolutions, and then we'd, from time to time, just randomly start singing Christmas carols. It was a great way to start 2007. 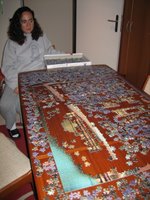 Puzzled-
The first days of 2007 were spent just taking it easy. We broke out a puzzle of the pre-911 New York skyline and proceeded to fall into a deep puzzle-hypnosis. My sister called us on New Year's Day, a couple of hours after we be hyp-MO-tized, to wish us a happy 2007.

Sis: "Happy new year! What are you doing?"

I guess I have to add "learn to speak English real good" to my list of 2007 resolutions.

holy crap that's a big puzzle! Looks like you've had all too much fun... and yes I noticed my english just sucked while I was in Switzerland... I think I just repeat words more now instead... (such as "like")...

ha, I always tell The Husband that he "talks English real good". The one mistake he makes is to say "make a picture" instead of "take a picture" and now he has me doing it too!

Ooooh Peanut butter/Chocolate Fondue! food of the gods! So there IS peanut butter over there! Happy New Year, it sounds like you rang it in with your usual wonderful aplomb and lovely friends :)

I think your puzzle of the Manhattan skyline is actual scale! Geez! Maybe you should rent a banquet hall so that you have a table large enough for all of the pieces!

Happy New Year to both of you! Piy we couldn't make it on the 30th, but OX and I raised our glasses to you at our N.Y.E.E. party!

OMG! I missed the salmon?!? We'll probably have a chance to catch up on that one. Happy New Year and lots of love, many more resolutions, health and happiness to the both of you.

You guys sure know how to party!

We have recently gotten into puzzles at our house.

We started slow with a 100 piece (amateurs!)

Then I got cocky and tried a 1000 piece puzzle. Just laying all the pieces face up was a task. Son #1 gave up before I had all the pieces face up. I worked on it for about an hour and got a 3" x 3" area completed, decided I don't have time in my busy life for this, packed it up and donated it to Son #1's classroom.

CS and OX - Welcome back and looking forward to seeing you this weekend at Zum Braunen Mutz! OX - I froze some of the salmon so you will not miss out!!!

Regarding all the comments on the puzzle - it is the biggest one we've made so far and after this weekend's labor we have a mot of progress to show. But - it does lead to some interesting marital situations. See my next post.