Mrs. TBF called me about 90 minutes ago. She's in Bangkok.

I find it absolutely amazing how she can adjust to time zone changes without any problem. Our flight left Chicago at 4:45 p.m. on Saturday evening... 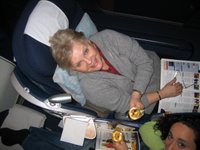 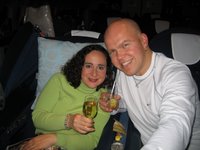 Oh...I have to mention that our friend, and Mrs. TBF's colleague - Jeanette, was not only on our flight, but managed to switch her seat so that she was sitting right next to us.

Also, I'm going to reveal, for the first time in public, that Jeanette is #1 (and Mrs. TBF approved) on the "if anything were to ever happen to Mrs. TBF, sugar mama succession list". Dido (sings to my heart), Scarlett Johansson (a mix of "...undeniable acting talent with wit and wisdom beyond her years" according to askmen.com), and Martha Stewart (knows her way around a kitchen combined with the added excitement of having been in the "big house") are also on the list actively vying for the #1 spot. Mariah Carey (I've liked the idea of living in NYC...at least for a little while. Oh...and she's really rich!) used to be on the list, but Mrs. TBF did not approve - I'm not exactly sure why.

So...getting back to time zone changes.

We made it home yesterday around noon(?). I guess I'm not exactly sure what time we got home since it's all a bit hazy. This morning, I drove Mrs. TBF to the Basel train station where she took a train to Zürich Airport. Then, she flew to Bangkok - five hours ahead of Basel and twelve hours ahead of Chicago. As I said, I just spoke to her. She told me that she had actually managed to sleep on the plane and was now watching the sunrise while being driven to her hotel. I'm thinking that she'll probably check into her room, take a quick shower, and then head to the office.

That right...she will go right to work.

She does this all the time. None of this "leaving a day ahead of time so that I can get acclimated" business. Nope! She lands...and pretty much goes right to work. Me? I'm sitting here in Basel, wide awake, because I'm still on Chicago-time.

Right before we hung up, Mrs. TBF said: "You're going to go right to bed now...right?" I told her I would, but then I began thinking about it. You see, I consider myself to be in training right now....for the Super Bowl.

As you may have heard by now, the Chicago Bears have made it to the Super Bowl for the first time in 21 years. The game is this Sunday and I intend on staying up to watch it live. The problem is that the game starts at midnight here, and that means that I'll have to stay up until about 4:00 a.m. if I want to watch the whole game. So, I'm just going to go to bed between 3:00 a.m. and 4:00 a.m. this whole week.

I don't know what Mrs. TBF is going to do. She'll be back in Basel this Friday, but she'll be having some trouble if she's still on Bangkok time when the game gets going in the wee hours of Monday morning; that's because the game starts at 5:00 a.m., Bangkok time.

My guess? I will be snoring away on the sofa by 12:15 and she'll stay up to watch the whole game. Then, she'll get a couple of hours of sleep and go to work. She'll be fine when she comes home from work in the evening, and...

Small correction TBF - Bangkok is 6 hours ahead of Basel.
Oh, right now it's 11:18 PM and I've been up since 4AM (after waking up on the Thai Air flight for breakfast, 10PM Basel time the night before) Is everyone as confused as I am - time for me to go to sleep.

I don't understand how you can do it, Mrs. TBF. Really. It's a mistery to me.

MTBF - I stand corrected. I'm guessing that they don't move the clocks back an hour in the fall in Bangkok because when we were there in early October, 2005, I distinctly remember watching the World Series, and we were 12 hours ahead of Chicago.