I had good intentions of blogging more often after we returned home from Rome, but it seems that a hectic social calender kept us a bit too...busy, Busy, BIZZZZY! Here's part one of the recap: 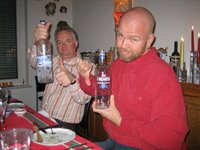 The first thing on the agenda was our "Caviar and Vodka Evening" - or, C.A.V.E. for short. It all began when our friend John asked me a few weeks back if I had ever tried Grey Goose vodka. I told him no, and plans were immediately hatched. John would buy some duty-free Grey Goose and caviar while on a business trip, and I would defrost and grill John's birthday present (G.O.M. - gift of meat/U.S. ribeye) that had been sitting in our freezer. Since Mrs. TBF, Rammy, and (unexpectedly, but happily) Andy (a.k.a. "G.O.M.E.R." - Gift of Meat Extra Recipient) were also going to be there, I had to make an extra run to Globus to buy more U.S. steak.

The evening arrived. John unveiled the freezer-chilled bottle of Grey Goose and the jaw-droppingly expensive, teeny-tiny tin of caviar. We broke out the frozen shot glasses, some blinis, a little of this and a little of that, and a nice starter was had. We even had a side by side taste test putting Grey Goose up against Finlandia vodka, and I'm sad to report that the Grey Goose was FAR superior. Sorry, dad!

Some champagne was poured, followed by some nice wine that Andy brought along, followed by the steaks which everybody raved about (...no surprise here. They were American steaks, AND they were grilled by yours truly - the grill master!). Afterwards we had Mrs. TBF's peanut butter/chocolate fondue for dessert.