Shiver In My Bones... 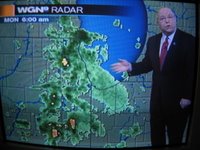 ...just thinking about the weather.

I'm not gonna get all Tommy Skilling (Chicago weatherman extraordinaire!) on your ass, but now that the books have closed on January, 2007, I'd like to let you know that...

Most of our Basel-based British friends think that Basel has possibly the best weather on the face of the earth. From what I've seen on Sky, I can understand why they feel that way; it rains A LOT in the U.K.!

If you ask me how the weather is in Basel, I'll gladly tell you that it ranks in the category of MAJOR LEAGUE SUCKAGE!!! Compared to Chicago, there are a lot more rainy days in Basel. Yeah, YEAH...Chicago has a lot more severe weather and a lot more rain than Basel does if you're a weather-geek like me and keep track of things like total annual accumulation, but in Chicago you usually have: a torrential downpour that lasts about thirty minutes, a 100-year-old oak tree falling through your roof, and then brilliant sunshine pouring in through your new skylight for the next four days...before next week's 14-minute hailstorm dents your entire high-lined Pontiac Firebird. In Basel, it drizzles...sometimes...day...after...day...after...day! The skies are often grey, then the sun peaks through just when you have to leave the house, causing you to become over-optimistic and leave your umbrella at home, and then the annoying drizzle begins minutes later. This process repeats itself an average of about forty to fifty times per day (especially in spring).

Now, Mrs. TBF has always said that the weather here isn't as bad as I make it out to be. Rather than debate the issue with her, I decided to come up with my own weather rating system; a complicated system of TBF analysis, algorithms, and set theory, I'll have you know...

1 - A total washout of a day. Your typical pissin'-down-rain-all-day kind of day.

2 - A day of drizzle with periods of no rain, but cloudy.

3 - No rain at all! It can be mostly cloudy, but the sun should at least be trying to peek out from behind the clouds.

4 - Mostly sunny. If it's cloudy in the morning, but then becomes sunny for most of the rest of the day, then it's a pretty solid 4.

I do give half points (i.e. 1.5, 2.5, etc.), but not quarter-points. Also, I only count the days that I'm at home. This is my rating system, and I'm not listening to anybody else. Mrs. TBF and I have already had a couple of days where we've had differences of opinion regarding half-points. At that point I just hold up my hand in front of her face and tell her to "...talk to the hand, 'cause the weatherman ain't listening!"

As you can see, I don't pay any attention to temperature. For me, it's all about how sunny it is. Sunny day = happy TBF!!!

That's right! A very clean, safe, and boring 3.0. The average day was mostly cloudy with no rain. The worst day was January 1st which was a 1.0. The best day was January 30th which was a 4.5. Of course, we were in Chicago during last week's snowstorm in Basel, so the actual rating (had we been home for the entire month) was probably less than a three. But...my rules are my rules!

You know...this weatherman thing isn't all bad. Had I known that a bald guy like Tommy could end up making (a reported) $3 million per year, maybe I would have pursued a different career path.

Thank God I'm getting home tomorrow - you are officially in out of control blogmania with me not there!

oh, and by the way, i gotta shiver in my bone. hehehe i just said bone.

I'm happy to report that yesterday was the first "5" of the year in Basel!