As we were walking into the Sony Center at Potsdamer Platz, I told Mrs. TBF that I thought it looked very Helmut Jahn-ish. As it turns out, Helmut Jahn WAS the architect, which resulted in Mrs. TBF accusing me of being an "architecture geek"! 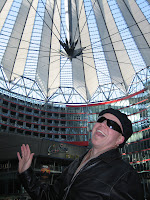 Feeling very cock-sure at this point on the Helmut Jahn-coup, I pointed out to Mrs. TBF that the Sony Center ceiling reminded me of the scene in the movie Independence Day where the spaceship is settling over Area 51 and Robert Loggia blurts out: "They're preparing to fire their primary weapon!" She agreed, and even tolerated the half-dozen or so "...they're preparing to fire their primary weapon..."s that I blurted out in rapid-fire succession as we walked toward our lunch spot. 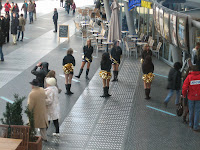 Then, as we lunched at Lindenbräu (a restaurant/brewery recommended to us by the Expatters), I enjoyed watching a gauntlet of cheerleaders that shook their pompons as people walked into the adjacent sports bar. 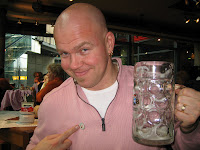 Oh...I don't know. Maybe it was the one-liter beer I drank (along with the lapel pin I was awarded for finishing it), but I suddenly became very cavalier and started talking "crazy" talk. Yup, I decided - and advised Mrs. TBF - that I was going to be buying her a cheerleader uniform.

ay-ay-ay, very foxy in those pictures.

On another note, have you switched over to the new Blogger yet? I tried to sign in today and it seems that it will not allow me to continue on in the old software.

Tinakala - Thanks. Oh...you meant the cheerleaders...

CB - Yes, I was forced to switch to the new Blogger about a month ago. Just do it...it's painless.

Could those cheerleaders look just a little more unexcited to be there?

The Sony Center was the home of our everyday "Double-D" stop.

You get a pin for drinking a simple beer?? Ok, it is one liter, but still. Do you get a bigger award if you drink two?

CS - I'm not sure. They actually had a 1.5 liter beer, but I opted for the 1-liter beer instead. Who knows what kind of crazy talk would have happened if I had gone large.